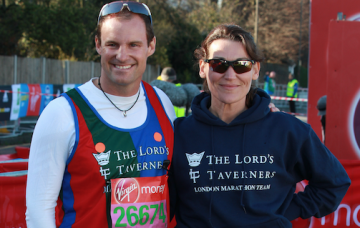 The wife of ex-England cricket captain Andrew Strauss has died following a battle with a rare form of lung cancer.

Ruth, who had two sons, Sam, 13, and Luca, 10, with her husband, passed away surrounded by her family in her native Australia.

In a statement released by the England and Wales Cricket Board, Andrew said: “It is with great sadness and immense grief that we have to announce that Ruth passed away today as a result of her rare lung cancer.

“Sam, Luca and I will miss her terribly.

“Anyone who has met Ruth will know how loving, caring and passionately protective she was of her family.

“It gives us huge comfort that she was in Australia, the land of her birth, surrounded by those who love her, in her final moments.”

A foundation in his wife’s memory would be set up to raise funds for research into the disease, he said.

The actress was diagnosed with the rare form of cancer in December last year.

Andrew stepped down from his role as England’s director of cricket as his wife underwent treatment.

Some news from Andrew Strauss, Director of England Cricket.

Our thoughts and best wishes are with Straussy and his family. pic.twitter.com/PQtxsW1PWt

The couple met in Sydney in 1998 and married five years later.

Andrew credited his wife for her role in helping him lead England to victory in The Ashes against Australia in 2009.

He added in today’s statement: “We would like to send our heartfelt thanks to those that have helped with her treatment over the last 12 months, in particular the wonderful team at University College Hospital in London.

“Ruth desperately wanted to help those affected by this terrible disease and we will be launching a foundation in due course to raise much-needed funds to aid research and also to offer support to patients and their families.”

Have you been affected by cancer in your family? Leave us a comment on our Facebook page @EntertainmentDailyFix and let us know what you think!