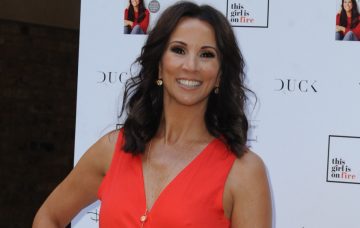 Once she saw her husband-to-be everything was okay, though

Andrea McLean has recalled the “horrible” panic attack she experienced just minutes before tying the knot with husband Nick Feeney.

The Loose Women panellist, 48, told OK! Magazine she’d been in the car on her way to the ceremony when the panic attack suddenly came on.

She described how her wedding dress “felt so tight and I couldn’t breathe”, and she could feel her anxiety levels increasing, adding: “I thought I was going to be sick or faint.”

Andrea said the panic attack subsided, however, when she arrived at the venue and locked eyes with Nick.

She said: “One look at his face and I felt this huge rush of love for him and was fine. I’d just been so worried that I was doing the wrong thing,”

Andrea added that she’d been worried the marriage would fail, like her previous two marriages, but Nick had been amazing at settling her down and reassuring her it wasn’t an unusual concern.

The full interview is in this week’s OK! Magazine, out now.

Andrea previously spoke about her wedding day panic attack on Loose Women in May, saying: “As soon as I got there the registrar was wonderful and took one look at me and said, ‘Have a glass of water and just calm yourself down.'”

She continued: “Then we sort of walked in and they played the wrong music, which calmed me down! I was thinking, ‘Well, there you go!’ And the moment that I looked and saw him, everything melted away.

“I just felt this huge rush of love and it just felt so right, it was so lovely.”

Andrea and Nick married in London just before Christmas, after being introduced by friends on a blind date in 2013.

Nick had popped the question in August while the couple were enjoying a romantic break in Paris.

Meanwhile, Andrea was the centre of attention at her glamorous book launch party in London on Tuesday night.

The television presenter was joined by Loose Women co-stars including Christine Lampard and Nadia Sawalha at a glitzy party to mark the release of Confessions of a Menopausal Woman.

How did you feel right before you married? Leave us a comment on our Facebook page @EntertainmentDailyFix and let us know.