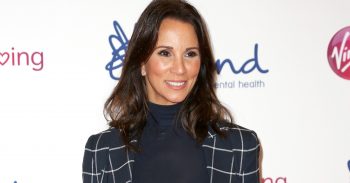 It eased the menopause side effects

Loose Women’s Andrea McLean has revealed that she used cannabis oil to help with hot flushes and crippling anxiety brought on by the menopause.

Mum-of-two Andrea, 49, has admitted to suffering from forms of social anxiety for much of her adult life and suffered greatly during her menopause.

Now she says she’s in the best place she’s been in for years, all thanks to cannabis oil.

She told the Mirror: “It has massively taken the edge off things with the flushes and it has made me less anxious because anxiety is still a key thing for me.”

After being prescribed Propranolol pills – a type of beta blocker – by her GP to help with her anxiety, Andrea then heard about the medicinal benefits of CBD hemp oil and decided to give it a try.

“Unless you have experienced it [anxiety] like I have, where it feels like there is a tiger in the room, then no one really understands what it is like. It is awful.”

Andrea admitted the Propranolol did “change her life” when the doctor suggested it.

“It is not an anti-depressant but what I no longer feel is that sensation of being on high alert.”

The star, who won a new army of fans after her courageous stint on Celebrity SAS, says that she’s, “a lot better”, but admits she does still sometimes “cancel an hour before I am due to go out. Then I hate myself for it.”

Andrea went on to say she finds social situations “overwhelming”, but that now she has husband Nick in her life she feels much better.

The star says they compliment each other perfectly.

Andrea has been open about her struggles with the menopause and is set to head off around the country sharing her life story.

She told The Sun Online: “I’m keen for women to know the menopause is something that happens to half the planet and although it’s a part of you, it doesn’t define all of you.

“We need to normalise it and give people information so they can get the help they need.”

Have you ever used CBD oil for medicinal reasons? Leave us a comment on our Facebook page @EntertainmentDailyFix and let us know.