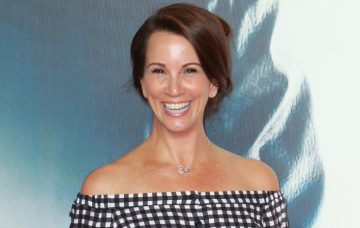 Andrea McLean and her son Finlay rubbed shoulders with Tom Cruise at the Mission Impossible: Fallout premiere in London.

The Loose Women star, 48, treated fans to a rare photo with Finlay, 17, as they prepared to hit the red carpet at the glam event on Friday night.

She told fans: “My date for the evening, my lovely boy Fin. Our mission tonight isn’t impossible… we are definitely going to enjoy ourselves!”

My date for the evening, my lovely boy Fin. Our mission tonight isn’t impossible… we are definitely going to enjoy ourselves! #missionimpossiblefallout #nightout

Fans lavished praised on the sweet snap, with one saying: “Wow he looks like you. He’s going to break some hearts I’m sure.”

Andrea doesn’t often share photos of her children online, but it’s been a good couple of weeks for fans, as just last week she shared another rare pic of Finlay.

Just waved my baby boy off to his prom… how has the time gone so fast? #babyboy #allgrownup #mumstuff

The photo was posted before Finlay headed off to a school end-of-year event and allowed Andrea the opportunity to reflect on just where time has gone!

She told fans: “Just waved my baby boy off to his prom… how has the time gone so fast?”

Many parents replied to say they felt exactly the same!

It’s been a busy time for Andrea who has been juggling her Loose Women panellist duties with the launch of her book, ‘Confessions of a Menopausal Woman: Everything you want to know but are too afraid to ask’, about her experience with going through menopause.

She had a glamorous star-studded launch party in June attended by her Loose Women co-stars including Christine Lampard.

Are you emotional at how fast your little ones are growing up? Leave us a comment on our Facebook page @EntertainmentDailyFix and let us know what you think!