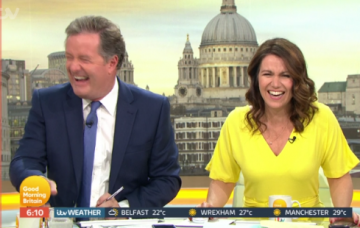 A rude place name set them off

Richard and Laura also couldn’t stop laughing when they saw the hosts trying (and failing) to contain their fits of giggles.

The moment was even more comical as it came after the presenters had been discussing Love Island.

Piers, who is not a fan of the show, said: “Are they looking for romance or just to have as much sex as they can possibly get away with?”

“Speaking of which, Laura is in Buckler’s Hard this morning with the first look at the weather,” Richard quipped as he laughed.

This prompted Susanna, Piers and Laura to all laugh along with him, with Susanna having to wipe tears from her eyes and Piers attempting to hide his giggles behind a mug.

“Every time I see the name written down, it does make me titter,” Laura said once she had composed herself.

She was then able to give her weather report before handing back to the studio, where Piers wanted to have some more fun.

“Where was she again?” he asked Susanna.

“She was in Buckler’s Hard,” she replied with a smirk.

“Where? How do you say that?” he asked again, with them both giggling as Susanna replied.

“Don’t be so childish!” she the mother-of-three then told him as she tried to get the show back on a more serious course.

“It’s like a scene from Downton Abbey after the watershed,” the 53-year-old joked.

The pair then went on to discuss how they would be on after the watershed on Thursday evening, when Good Evening Britain is broadcast for the first time.

The live show will follow England’s final group match at the World Cup, with guests including Danny Dyer.

Susanna warned her co-host that he might want to stop slating Love Island given the EastEnders star’s daughter, Dani, is on the show!

Piers has previously been vocal about how he thinks only “half-wits” go into the villa – and only “idiots” watch it!

Piers and Susanna’s fits of giggles today where unusual for the pair who are more likely to be seen bickering over their differences of opinion – especially when it comes to Love Island, as Susanna is a fan.

However their ITV colleagues Holly Willoughby and Phillip Schofield are well-known for breaking down in laughter during live broadcasts on This Morning.

What do you think about Piers and Susanna’s comical moment on GMB? Leave us a comment on our Facebook page @EntertainmentDailyFix and let us know what you think!