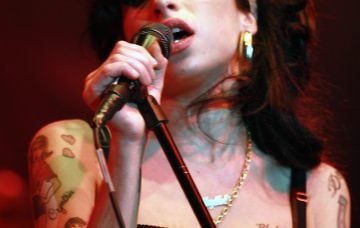 Amy appears at the end of her dad's bed, Mitch claims

Mitch Winehouse has claimed that he receives visits from his singer daughter Amy, almost seven years after her death.

Speaking to The Sun, Mitch claimed that Amy’s spirit sometimes appears to him, sitting on the foot of his bed, at his home in Kent.

“We do have our moments, ­particularly on her birthday, September 14,” he said. “It’s hard.

“After three years I was thinking maybe that one day she will come back in some shape or form, and she does come back — not physically, but spiritually — all the time.

“I could not begin to tell you how much she is around. There are lots of strange happenings.

“Her spirit comes and sits on the end of my bed. She just sits there and it looks just like her with her beautiful face and she looks at me. I say to her, ‘Are you all right?’ because I get ­nervous with her being there.”

Mitch claims there have been odd occurrences since shortly after the singer died, including him having been visited by a blackbird that resembled a tattoo Amy had on her arm.

“The week after she died I was at my ­sister’s house and we heard this thud and a blackbird that looked identical to Amy’s tattoo flew into the glass.

“We went and picked it up and put it up on a perch. It happened at night, when birds don’t fly, but it came back and sat on my foot.

“And then we put it back again and it came and sat in the middle of us and sang. I do now see blackbirds all the time. And you think, ‘Oh, it’s only a bird,’ but it’s her, I’m sure of it.”

Amy died in 2011 at the age of 27 of accidental alcohol poisoning, after years of struggling with drug addiction.

Earlier this year Mitch told The Sun he was hoping to turn her story into a West End musical, in tribute to his late daughter.

“A musical celebrating her life and music is being talked about for the near future,” Mitch said. “It is something I’d really like to happen and I’ve said I’m happy for it to go ahead.

“It would be for the West End. We want to do something that remembers Amy for what she was, there’s so much more to her than just the drugs and the alcohol.”