Peter Andre has delighted his fans by sharing a video of his son, Junior, singing and dancing.

But the 12-year-old might not be so happy when he finds out about his performance going online – as his dad secretly filmed him as he bounced around the room wearing headphones lost in music!

The Mysterious Girl singer can be heard giggling at his son as he sneakily filmed him from behind an ajar door. 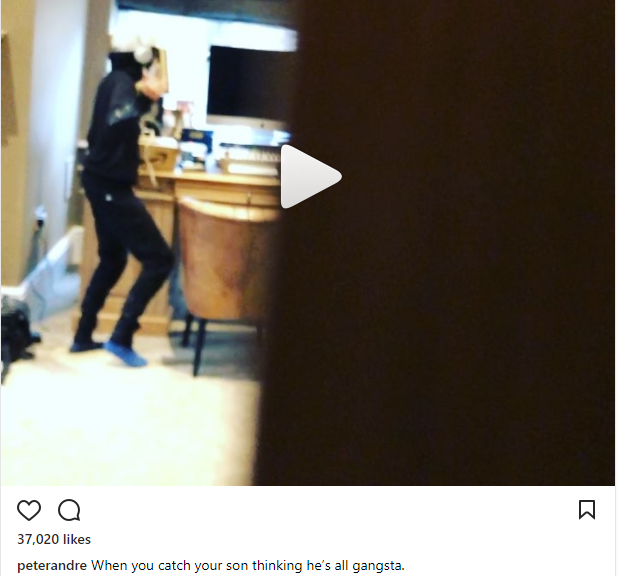 “When you catch your son thinking he’s all gangsta. Help,” he captioned the video, which gained more than 309k viewers within hours of being shared.

Peter’s fans found the video hilarious with hundreds commenting, many of them just with laughing face emojis.

“Who does he take after? Lol,” one fan wrote. “This has absolutely made my day!” said another.

A third declared: “THIS IS THE BEST THING,” while a fourth agreed, writing: “Hahahahh this is fantastic.”

Others warned the 45-year-old father-of-four that he better watch his back as Junior will get him back when he finds out when he’s done!

“Class… you’re in so much trouble @peterandre,” one told him.

Peter also gave fans an insight into his family time by sharing a cute snap of his eldest daughter with Katie Price, Princess, playing with his two children with his second wife Emily.

“This is what life’s all about. While dads making pancakes, Bista, Amelia and Theo make the perfect pic
#familytime,” Peter wrote beside the photo of his three children.

He ensured the faces of Amelia, four, and Theo, 18 months, were hidden from the camera, as Emily is against pictures of them being posted on social media.

Peter previously Closer Online he has to respect his wife’s wishes, but he still likes to push his luck!

He said: “I still get away with little things. There’s been times where I’ve posted stuff and you can’t really see the kids’ faces.

“Milly and Theo, they’re just so cute. I post photos of them because I’m proud of them and of these beautiful moments, and you want to show everyone just like 99 percent of the world does on Facebook – they put pictures on of their kids because they’re proud of them.”