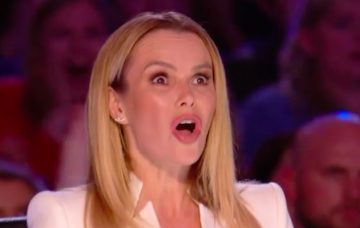 And it almost ends in disaster!

We’ve seen some pretty amazing stunts on Britain’s Got Talent over the years, but even the judges were impressed by the one you’ll witness on tonight’s show.

The Giang brothers flew to the UK from Ho Chi Minh City in Vietnam just to take part in Britain’s Got Talent, and it seems that their journey was well worth the effort.

Quoc Co, 33, and Quoc Nghiep, 29 arrive on stage topless and chiselled in daring stage costumes, prompting David Walliams to jokingly reach for the golden buzzer before they even perform.

The pair begin their routine, which features incredible feats of strength and balance that have the audience and judges enthralled.

The finale of their act sees one strap a small cushion to his head before lifting his brother into the air and balancing him head to head with no other support.

Not only that, but the pair walk around and perform a series of moves while they maintain their jaw-dropping balancing act!

The whole performance takes place on and around a small platform, and, as the brothers move backwards onto that platform while balancing on each other’s heads, they stumble and almost fall.

The audience are audibly shocked, but the pair recover and finished their act to rapturous applause.

Viewers will see the pair get great comments from the judges too, and, as Simon Cowell says that it was closer to the Olympics than a talent show, Amanda Holden confesses to being nervous throughout.

“It was utterly incredible and my heart was in my mouth for all of it,” she says.

“I don’t know where you find the strength from!”

It seems like they get their strength from an amazing amount of training, as the brothers revealed that they have been performing acrobatics together since they were just 10 years old and still practise every day.

Still, it seems that practice does make (almost) perfect!

Looking forward to tonight’s BGT? Let us know by commenting on our Facebook page @EntertainmentDailyFix!