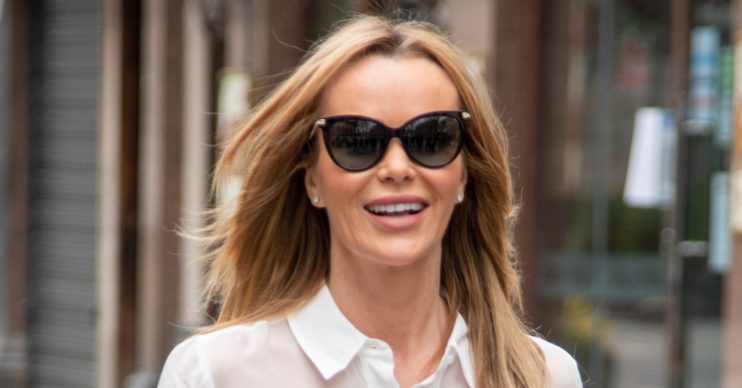 Amanda Holden has stunned Instagram as she opted for a sheer dress at Heart FM today (March 23).

The Britain’s Got Talent judge, 50, looked sensational in a Reiss design while at her morning radio show.

And it didn’t take long for fans to praise the star‘s “elegant” look on social media.

Showing off the outfit, Amanda shared a series of snaps to her Instagram Story.

The first showed the star posing backstage in the white utility dress and matching pointed heels.

Meanwhile, in a second clip, she confidently strutted towards the camera.

Known as the ‘Farah’ dress, the £235 design has a shirt silhouette with a sheer upper body.

In addition, a second wrote: “You look so stunning and elegant today!”

You look so stunning and elegant today

Another added: “Stunning in white!”

Meanwhile, it comes shortly after the star opened up on embracing her body.

In fact, she said that it’s “normal” for her family to see her walking around her home in the buff.

Read more: Amanda Holden defiantly strips to her pants after hitting the age of 50

Speaking to You magazine, Amanda said: “Oh, no one noticed. It’s absolutely par for the course for me to be walking around with no clothes on in our house.

“I was quite literally the Naked Chef. I got out of the shower, realised I was running late so didn’t bother to get dressed.

“I just raced downstairs, got the potatoes on, the meat in the oven and my veggie option. It definitely made it more interesting.”

Amanda shares her two daughters with her husband Chris Hughes.

During the ancestral show, Amanda was awkwardly snubbed by her long-lost cousin, who appeared to prefer the comedian.