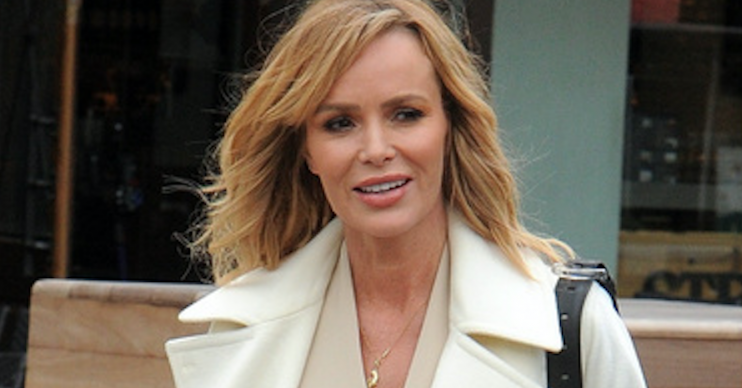 Followers judged her by her cover... and gave a good review!

Fans of Amanda Holden couldn’t believe their eyes this morning as the Britain’s Got Talent judge dressed up, apparently for World Book Day.

The 49-year-old got dolled up as Tinker Bell from Peter Pan novel Peter and Wendy for her breakfast shift on Heart FM – and it seems many of her enthusiastic social media followers certainly believe in fairies.

But it seems many of the thousands of Instagram and Twitter followers who Liked, commented on and shared the new snaps of Amanda may prefer to judge her by her cover, rather than her literary appreciation.

Her green, strapless outfit included a lace-up, corset-style top and a skirt made of layers of petal-shaped fabric in different material.

She also wore a pair of wings to accessories her unlikely workwear, as well as a pair of silver heels.

Tinker Bell never looked like that in my books!

She also shared another post of her larking about in her dress which also got hundreds of her gushing fans rather excited.

When you wish upon a star .. try not to crash into a wall #tinkerbell #worldbookday

Read more: Line Of Duty star Adrian Dunbar reveals series six will be on TV ‘in the next 12 months’

A short clip showed Amanda skipping down a corridor at Heart FM HQ, even though she didn’t look particularly light on her feet.

She captioned that post: “When you wish upon a star .. try not to crash into a wall #tinkerbell #worldbookday.”

Plenty of the tens of thousands that viewed that footage were quick to comment what a good sense of humour Amanda has, particularly for not taking herself too seriously.

But many more seemed to flood her comments sections with emojis and remarks which suggested her Tinker Bell look may be appropriate for more adult concerns than young readers may realise.

Among the comments fit to publish on ED! were those from some of Amanda celeb pals.

And ex Geordie Shore star Vicky Pattison said: “You are the cutest.”

“You look STUNNING,” remarked another fan.

And someone else echoed that thought, contributing: “What a stunner!”

Other followers noted how surprised they were that a fictional character from a children’s story could grab their attention.

And yet another person who confirmed a history of reading said: “Tinker Bell never looked like that in my books!”