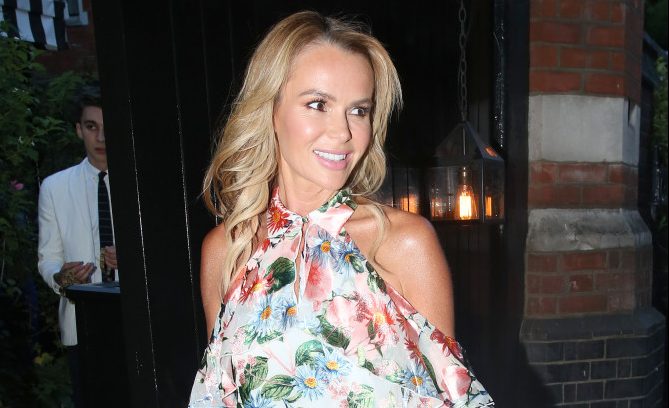 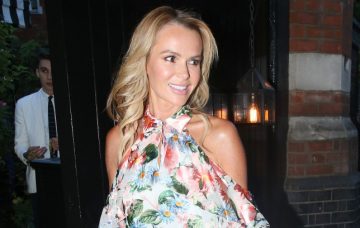 She also shared a funny story about Simon Cowell!

The Britain’s Got Talent star is currently holidaying in Los Angeles with husband Chris Hughes and their daughters Lexi, 12, and Hollie, six.

She posted a stunning family portrait to Instagram on Tuesday night, showing them posing in the warm California sunshine.

Amanda added no caption, instead using the hashtag “family time” to describe the moment.

Fans were quick to compliment her pic, with one saying: “What a gorgeous bunch you are.”

Another wrote, “What a stunning family you have there!” while a third told Amanda: “Really a lovely shot. Your daughters are beautiful.”

Others couldn’t believe how big Lexi and Hollie are getting!

Amanda, Chris, Lexi and Hollie have been visiting Amanda’s BGT co-star Simon Cowell over in LA.

The actress, 47, shared another shot to Instagram showing her with Simon’s girlfriend Lauren Silverman.

The two women were seen posing at a door which held a Harry Potter sign for the Platform 9 and three quarters, where the Hogwarts Express departs for the wizarding school.

Simon and Lauren’s son Eric, four, could be seen just out of camera view behind them.

According to Amanda, little Eric wouldn’t let Amanda and Lauren inside, as it was a no-mummy zone!

She also told fans she’d had to borrow a dress from Lauren after naughty Simon threw her fully dressed into his swimming pool!

Meanwhile, over the weekend Amanda shared another beautiful snap, this time with just her eldest daughter.

She captioned the moment with a string of hashtags including “California”, “holidays”, “love”, “family time” and “all grown up”.

Amanda said last year that Lexi wasn’t keen in following her mum’s famous footsteps, but her youngest daughter, Hollie, does want to be an actress.

She told Daily Mail’s You magazine: “The other day [Hollie] came up to me and said: ‘Mummy, I have good news and bad news. The bad news is that Lexi wants to be a vet. The good news is I want to be an actress.’

“I’m looking at her thinking how thrilled I am that Lexi wants to be a vet and also: ‘Oh no, she is me! Another me is being launched on to the world…'”

How are you spending the summer? Do you miss Amanda on TV? Leave us a comment on our Facebook page @EntertainmentDailyFix and let us know what you think!