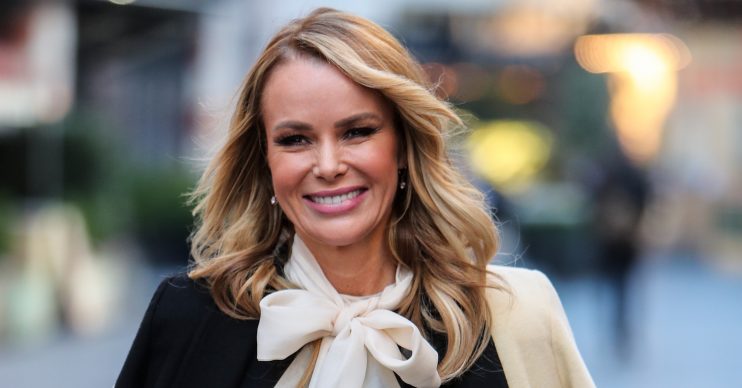 Amanda Holden has shared a cheeky topless snap to welcome in the New Year as the Britain’s Got Talent judge celebrates 2020 with her family.

The Heart FM Breakfast Show host posted the picture to her Instagram page, showing her lying in the sand with only Heart microphone ‘muffs’ covering her assets.

She captioned the snap: “Happy 2020, I’m All Heart!” before revealed she’s back on the radio on January 6.

Fans were quick to wish her a happy new year in return, as some told her she was “fire” and “sexy”.

But there were a few who felt the shot was “inappropriate”, with one adding: “It’s the kids I feel sorry for…”

An Amanda fan fired back: “Yeah, because this photo is something to be ashamed or embarrassed about?!”

Earlier on New Year’s Eve, Amanda had posted a full family shot with her husband, Chris, and their children, Lexi, 13, and Hollie, seven.

#happynewyear from us to you ❤️

“Happy new year from us to you,” she wrote.

The family are currently on a luxury break in the Maldives.

It’s not the first time Amanda’s breasts have been such a talking point.

She regularly wows on Britain’s Got Talent with her dresses, but gets a fair amount of commentary on how revealing they sometimes are.

Amanda has joked in the past she thinks it’s brilliant people are still talking about her boobs when she’s nearly 50!

The radio host isn’t the only one celebrating 2020 abroad. Presenter Holly Willoughby also welcomed in the New Year with a gorgeous family photo on a beach.

“Holly and Phil are great friends both on and off screen and are popular among viewers and colleagues alike.