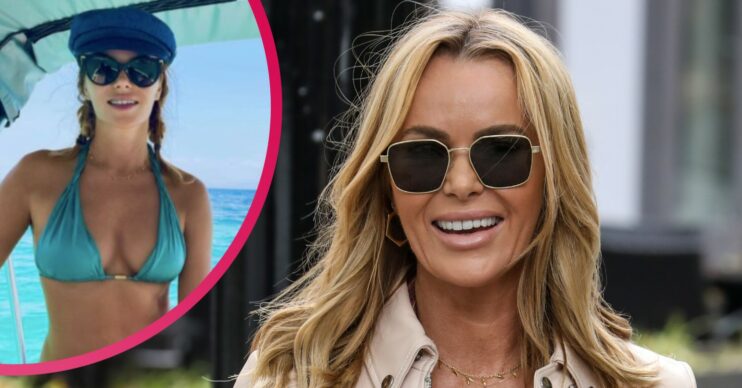 The star is enjoying a break in the sun

Amanda Holden has sent pulses racing on Instagram after slipping into another skimpy bikini while on holiday.

Amanda‘s bikini features a halter-neck top and tied briefs and she wore it while relaxing on a luxury boat.

Posting a photograph of herself climbing out of the sea, the mum-of-two told her Instagram fans: “All aboard #holiday #familytime.”

Fans have gone wild, with one commenting: “You look incredible.”

Amanda’s showbiz pals have also been showering her with compliments.

Amanda has also posted a second shot of herself on Instagram Stories. It shows her posing onboard the boat with her hair in pigtails.

On Friday (July 23, 2021), Amanda told fans that she had escaped the UK for tropical climes.

The Heart FM Breakfast Show presenter is currently off air for the summer and has jetted abroad with her husband Chris and daughters, Lexi, 15, and Hollie, nine.

Sharing an equally sensational bikini picture, she wrote on Instagram yesterday: “And #breathe #familytime in the #sunshine.”

In February, Amanda celebrated her 50th birthday and declared that she will not be “growing old gracefully”.

Ahead of her big milestone, the Britain’s Got Talent judge told Heat magazine: “I don’t see the point in growing old gracefully.

“I love that people are still talking about my tired old breasts and I’m nearly 50.

“Age is totally irrelevant, thanks to people like J.Lo – a hot woman who dresses for how she feels.”

Retail giant JD Williams have been quick to celebrate Amanda’s stance, along with similar views shared by Davina McCall, who is 53.

Last week, the pair were announced as the new faces of the brand.

Confirming the partnership to her followers, Amanda posed in a skimpy white leotard and hooked one leg up on a bike in a sexy Instagram shot.

Davina, meanwhile, shared a clip of hers and Amanda’s new TV advert.

She told her fans: “Yessss! Our secret is out @noholdenback! So excited to be working with @JDWilliamsUK.”

Davina added: “I’ve said it before… brace yourselves!! Can’t wait for u to see what we’ve been up to … OMG.”