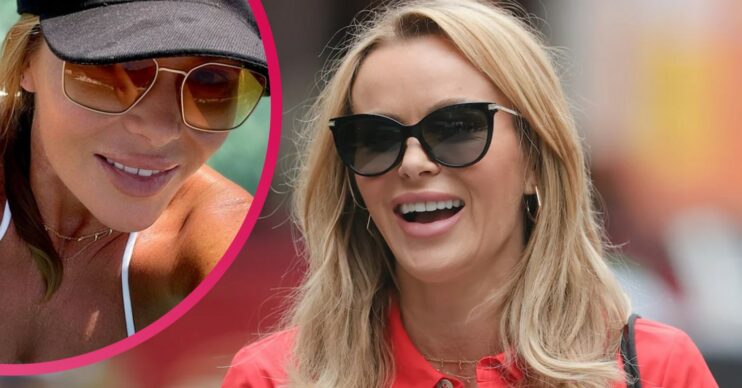 She's having an exceptional summer holiday, it seems

The scorching hot summer of Amanda Holden continues – as does her social media tendency of sharing eye-popping posts on Instagram.

Britain’s Got Talent judge Amanda has shared several recent glamorous holiday shots during her time off from Heart FM.

And the latest in her long series of dazzling snaps will no doubt leave ardent observers wowed yet again.

Amanda uploaded a picture of herself looking very much in the holiday spirit on Insta Stories earlier today (August 7).

The selfie showed her looking upwards into the lens while apparently in a pool.

Wearing sunglasses and a cap, Amanda appears to have been protecting herself from the sun’s rays.

But her stunning white bikini meant she wasn’t entirely covered up.

How have Amanda Holden fans reacted?

Due to the fact this image was posted on her Stories, fans’ comments are not visible.

But anyone who has ever spent more than a few seconds in the comments of Amanda’s posts will suppose the eyes of many will probably be drawn to her cleavage.

A separate Story explained Amanda was missing out on Ant McPartlin’s wedding to Anne-Marie Corbett because she is still away for her break.

How old is Amanda Holden?

Amanda Holden’s age – and more specifically the question how old is Amanda Holden? – is a popular search phrase on Google.

Hopefully that means those who see her posts on Instagram cannot believe what incredible shape Amanda is in!

She was born in February 1971 which means earlier this year Amanda turned 50.

Amanda made her telly debut as a contestant on Blind Date in 1991, when she was just 20.

That means Amanda has been on or around television for three decades!

But her breakthrough TV role was in 1998 Caroline Quentin sitcom Kiss Me Kate.

Amanda played receptionist Mel in the BBC comedy which ran for three series until 2000.

What has Amanda said about her age?

Ahead of her milestone celebration, Amanda made it clear that age is just a number to her.

She told Heat magazine: “I don’t see the point in growing old gracefully.

“I love that people are still talking about my tired old breasts and I’m nearly 50.

“Age is totally irrelevant, thanks to people like J.Lo – a hot woman who dresses for how she feels.”