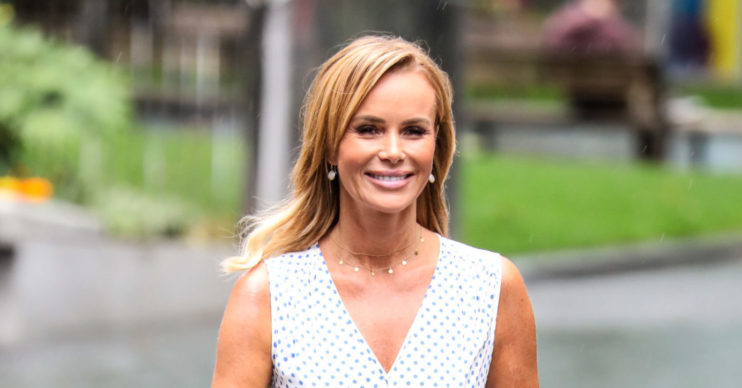 The 49-year-old Britain’s Got Talent judge turned heads as she made her way into the Heart FM Radio offices in London’s Leicester Square on Thursday (June 18).

Amanda appeared to be feeling the chill as she stepped out in the flowing polka-dot midi from her collection.

But flashing her nipples to the camera clearly didn’t bother the star as she confidently strutted in the rain.

She accessorised the outfit with a royal blue bag and nude heels, while her locks were worn down.

Another wrote: “A beautiful dress worn by a beautiful gorgeous lady.”

Amanda’s no stranger to an ultra-revealing outfit.

Last month, she left viewers stunned with a silk floral dress that featured a very low cut top half on The One Show.

Some seemed in awe of the flowery number, while others slammed it as “inappropriate”.

One tweeted: “Why is Amanda Holden allowed to wear such a revealing dress on The One Show, supposedly a family show?”

Another defended her outfit of choice with: “She’s showing a bit of her body which 50 percent of people have. Why be so easily offended?”

While last year, the mum-of-two was forced to hit back at critics who slammed her sexy dresses on BGT’s live semi-finals.

She stated: “My [bleep] seem to become the show’s biggest talking point every year.”

Speaking to The Sun, the judge also said that her outfits had been positively received by her husband of ten years Chris Hughes.

Earlier this week, it was reported Amanda and her BGT co-stars may have to film the upcoming live finals “without an audience” for the first time in the show’s history.

ITV bosses are said to be doing all they can to ensure the finale of the hit show goes ahead.