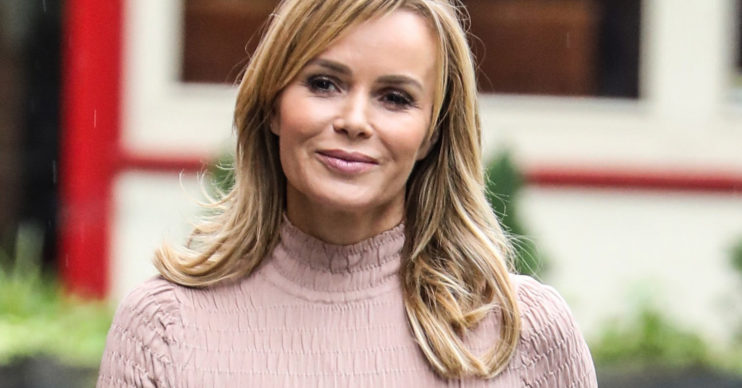 Amanda Holden leaves little to the imagination in fitted dress

Television star Amanda Holden left little to the imagination as she braved the cold weather in central London.

The 49-year-old Britain’s Got Talent judge looked sensational as she took to the street in a fitted nude dress, which showed off her incredible figure.

She teamed the fashionable get up with a cream clutch bag and glamorous makeup as she arrived at the Heart FM Radio offices today (June 10).

Despite the rainy weather, Amanda beamed as she confidently strutted in the floaty gown.

She later debuted the look on Instagram by sharing a video of herself twirling into the London offices.

Alongside the clip, she wrote: “Twirling into #wednesday.”

Fans were quick to compliment the look, with one writing: “You’re so beautiful Amanda.”

A third joked: “Thought you were turning into Wonder Woman for a minute there.”

The secret behind Amanda’s figure

Amanda regularly wows in fitted bodycon dresses, with her recently revealing the secret to her flawless figure.

The TV host – who is known for her nipped-in waist and washboard abs – swears by wearing a pair of bodyshaping and smoothing Spanx under her frocks.

While chatting to presenter Emma Willis on Instagram Live, Amanda opened up about what goes on behind the scenes at BGT with co-star Alesha Dixon.

She said: “We wear slippers under the desk, we eat food, we wear Spanx.

“It’s so nice to have another girl there alongside me.”

Behind the scenes at BGT

Amanda also spoke about the relationship between her, Alesha, Simon Cowell and David Walliams, saying it’s ‘too real’ to be faked for the show.

“When David came he pushes all of Simon’s buttons, and we got to see that and the relationship between them has lifted the show,” Amanda added.