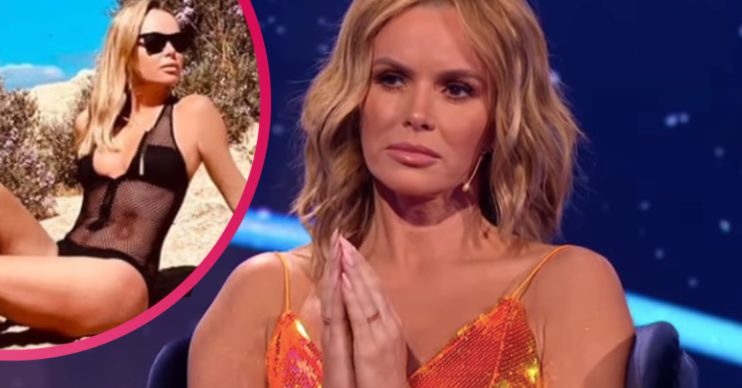 The BGT star is in her best shape ever

Amanda Holden has once again proven that she knows how to pull off a skimpy swimsuit as she poses on Instagram.

The Britain’s Got Talent star is currently living it up abroad.

While enjoying the sunshine, Amanda’s not been shy about sharing an array of eye-popping snaps of herself.

And in classic Amanda Holden style, her latest has once again had her Instagram followers in awe.

The 50 year old sizzled in a daring black mesh swimsuit that helped show off her gorgeous figure.

Read more: Amanda Holden poses up a storm in a white bikini on holiday

In another sexy snap, the former actress showed off her slim waist while posing on a rock in the sun.

A second responded: “This is super sexy!”

“A Goddess is all I can say, wow!” added another follower.

Amanda is known for enjoying the attention she gets from showing off her age-defying figure.

Whether it’s on Instagram or on TV, Amanda has never allowed the controversy to change her style.

Earlier this year, Amanda sparked outrage from some viewers with the outfits she wore on BBC show I Can See Your Voice.

At one point she wore a  see-through dress that left very little to the imagination.

Meanwhile, this week Amanda was forced to defend a picture she shared of her daughters.

Eldest daughter Lexi could be seen wearing make-up in the pretty snap.

Soon Amanda was targeted by trolls who thought her daughter was too young to have lipstick on.

Many of the star’s fans commented on how gorgeous both the girls were, and how much they look like their mum.

“Not sure about the make-up on kids!?!?!”shouted another follower.

However, some hit back at the trolls, with one saying: “Why do you feel the need to comment on the way someone is trying to express themselves?”