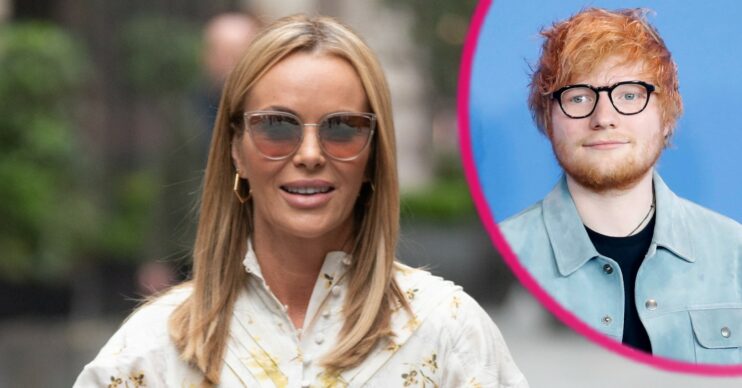 The presenter called the moment 'heartbreaking'

Amanda Holden appeared emotional on Heart FM as Ed Sheeran surprised a fan on the show.

The presenter was touched after hearing the story of Rafa, who learnt to play Ed‘s songs during lockdown to entertain his cancer-stricken grandad.

Rafa and his grandad Norman appeared on the radio show this week to share their story.

During the segment, the youngster went on to perform a rendition of Thinking Out Loud.

However, he was left stunned as Ed walked in on the performance.

The two then went on to perform together, with Rafa playing guitar.

The touching moment left Amanda emotional as she wiped away tears from her eyes.

Meanwhile, Norman appeared teary as he proudly watched his grandson.

Thankfully, Norman is now in remission after being diagnosed with cancer.

Following the performance, Amanda took to social media to praise the singer.

The mum of two shared a snap alongside the musician in the radio studio.

She captioned the post: “Well. What a lovely lovely morning and this man. @teddysphotos is so classy kind and wonderful-everything you’d hope for.

“#badhabits his new single is out now.”

Sharing a video of the moment, Amanda said: “@teddysphotos surprise of a lifetime for his superfan Rafa!

“My heart broke watching 10-year-old Rafa perform with his idol Ed Sheeran in front of his grandad Norman.”

Meanwhile, Amanda’s celebrity pals rushed to comment on the surprise.

“Jeez! How lovely was that! Made me sob happy tears,” Kate Thornton commented, while Louisa Johnson wrote: “Omg.”

The touching moment comes days after Amanda divided her fans after wearing a bright orange jumpsuit.