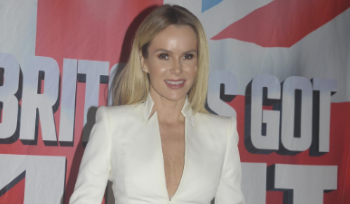 She's been happily married to Chris Hughes since 2008

Amanda Holden has admitted she gets told off by her husband for revealing too many secrets in public!

The Britain’s Got Talent judge has confessed to being “put on the naughty step” by her other half when she over-shares!

According to Daily Star Sunday, she said: “Much to my husband’s dismay I confess something to a newspaper or something or other every week by accident, or on Twitter.

“Obviously there are personal things which I would not broadcast. But I regret saying things every week – and Chris puts me on the naughty step.

“He says, ‘I can’t believe you would say that Mandy’.”

Amanda’s comments are similar to those she told The Express two years ago, where she spoke about just being a very talkative and honest person who loves to chat.

Amanda didn’t specify just what titbits Chris may not have appreciated but previous revelations have included the couple’s saucy antics while watching TV, her husband having a plaster cast made of her bottom, and hinting she has a “magic box” of sex toys.

The pair have been married since 2008.

While Amanda may sometimes share a bit too much about their private lives, she also frequently lavishes praise on her other half in interviews.

Earlier this year she told Daily Mail’s You magazine: “Chris is my rock. He is the most incredible man and he knows me inside out. It’s not just bad times, it’s all times; Chris is there.

“We are an absolute team. We make each other laugh. I like nothing more than having a laugh with all my friends and family around me. That is the point of life.”

Do you ever get told off for over-sharing?  Leave us a comment on our Facebook page @EntertainmentDailyFix and let us know!