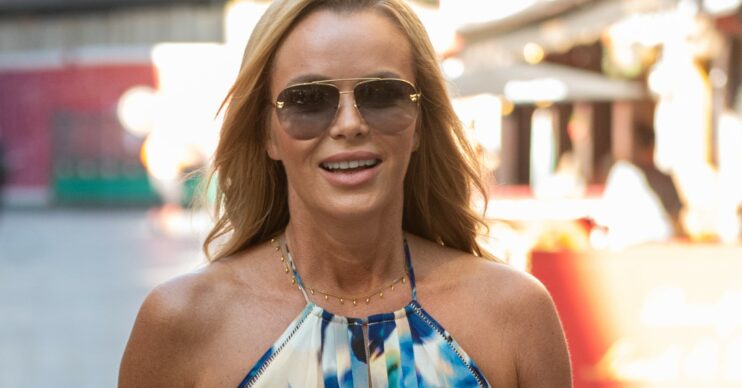 Amanda is filming for I Can See Your Voice

Amanda Holden has showcased her incredible legs on Instagram as she wore a black mini dress.

The star recently confirmed she’s filming for the second series of BBC’s I Can See Your Voice.

On Friday, Amanda shared a video to her Instagram Stories as she was lifted in the air by a mini crane behind the scenes.

In it, Amanda is seen posing in her stunning dress and black heels.

Amanda had her blonde hair styled in loose bouncy curls.

Meanwhile, Amanda always wows her fans with her outfit choices.

Earlier this week, the mum-of-two stepped out in a champagne plunging jumpsuit as she attended David Walliams’ 50th birthday bash.

Amanda paired a matching champagne headband with the outfit.

She wrote on Instagram: “All dressed up for someone’s big birthday bash.”

Meanwhile, Loose Women star Janet Street-Porter later revealed she helped Amanda get out of her jumpsuit to go to the toilet.

She explained on the daytime show: “But the highlight of my evening took place in the ladies loo, where Amanda Holden asked me to help her take her dress off, well, she had a jumpsuit.

Janet added: “I had to help Amanda unhook the top part to slide it down to have a wee! So, that’s my claim to fame this week.”

Read more: The Holden Girls viewers deliver verdict on show and Amanda Holden might want to look away

She said on her Heart radio show: “It was very overwhelming, it was amazing.

“David rode in and I forgot to say, on a plastic white horse as well. Much like Madonna.”

Amanda Holden I Can See Your Voice Style