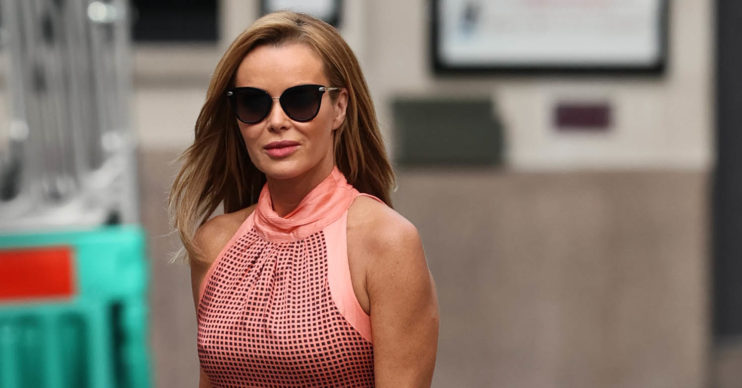 Amanda Holden may have got more than she bargained for when she didn’t wear a bra in her latest post.

The actress turned media personality, 49, shared a glam photo of herself at the Heart Radio studios.

However, her fans couldn’t help but notice that she wore a dress without a bra.

In the snap she is proudly posing in a long halter neck summer dress.

Addressing her 1.5 million Instagram followers, she wrote: “I’m tagging in my entire Glam team as last night we finished filming so late I just went to bed with it all still on! My pillow was literally orange this morning.”

One user remarked: “There is no bra…” while another teased: “Bullets are back.”

A third user asked: “Cold?” and another jibed: “Bit chilly.”

The cheeky jokes continued but luckily her celebrity friends  were able to reassure her with genuine compliments.

And despite the weather taking a turn for the worse, Amanda was shown arriving at the studio without a jacket.

The toned and taut star proudly strolled up to Leicester Square in the stunning get-up and even donned a pair of oversized sunglasses.

She is known for her rather revealing outfits through the years.

Amanda is proud of her body – and should be!

And Britain’s Got Talent even received 34 complaints last year over a particularly barely-there dress.

Viewers branded her black plunging dress as “shocking” and too much for a “family show”.

But Amanda defiantly responded to the negativity with a clap back to The Sun.

She told the paper: “My [expletive] seem to become the show’s biggest talking point every year.

“We’ve had plenty of complaints apparently, but none from home, let me tell you.”

It is unconfirmed if Amanda has ever had any cosmetic procedures done.

However, she is very open about sharing her beauty regime secrets.

She even said when she’s too tired to do a full face of makeup – she turns to one trusty tool.

She swears by blush, which she says works like a treat every time.

Speaking on her radio show earlier this year, Amanda said: “Ladies, if you want to keep those youthful looks, blusher is the answer to all your worries!

“Whenever I don’t want to wear makeup, or whenever I can’t be bothered, I just whack on way too much blusher. Then I instantly look alive and well. I swear by it, and I could never have a makeup bag without blusher.”