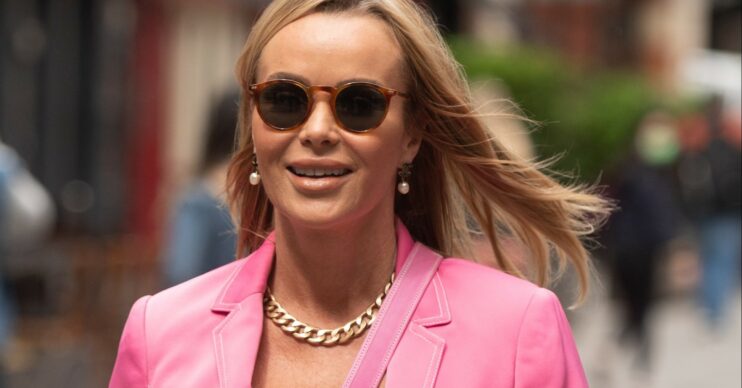 Amanda Holden looked sensational on Instagram as she ditched her bra to pose in a risque plunging dress.

The popular TV presenter showed off her fantastic figure in the snap taken on her family holiday.

Amanda, 50, is seen perched on the back of a boat with her hair blowing in the wind looking to one side for the snap.

She wore a gorgeous simple white plunging dress and delicate gold and pearl layered necklace. Amanda teamed her frock with hoop earrings and oversized sunglasses to complete the look.

The warm summery vibe of her post is added to by the stunning late evening skyline with the sun setting behind her.

She captioned the post with the hashtags “taxi, dinner, family” as they headed off to enjoy an evening out in Greece.

Amanda’s famous friends were quick to comment on her sultry appearance as they gushed over the photo in the comments section.

What did Amanda’s followers say?

Amanda is holidaying with her husband Chris Hughes and their daughters Lexi and Hollie.

Earlier in the week, she delighted Instagram fans by posing in a tiny white bikini as she perched on the edge of a yacht.

Meanwhile, her ex-husband Les Dennis has mocked Amanda over her affair with Neil Morrissey in 2000.

During a recent appearance on actor Christopher Biggins’ podcast, Les made reference to the shock affair.

Les, who has previously starred in Xmas pantomimes with American actor Mickey Rooney, said that the star would become aggravated when they would play Frank Sinatra songs.

Les explained:  “Mickey would get very angry because of course, Frank Sinatra ran off with Ava Gardner, Mickey’s wife.”

He then went on to poke fun at Amanda. He said: “It would’ve been like me having to listen to Bob The Builder every night.”

If you didn’t know, Neil was the voice of cartoon character Bob the Builder for 14 years.