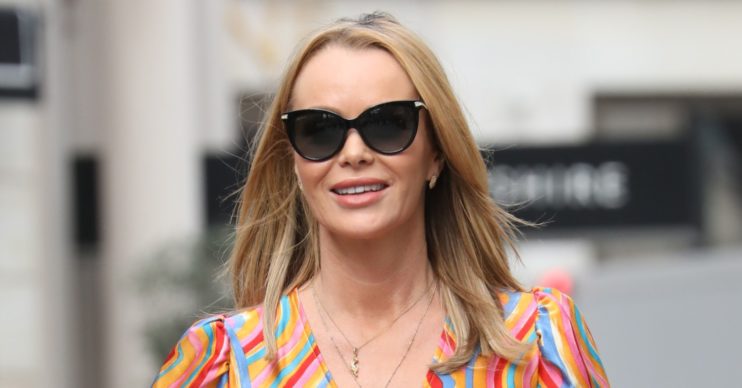 Amanda Holden has taken to Instagram to show off her latest colourful outfit.

The Britain’s Got Talent star, 50, looked sensational as she posed at Heart FM radio show in a stylish two piece.

In true Amanda style, the presenter stood out in a second snap with pal Ashley Roberts.

The technicolour outfit from Never Fully Dressed consists of a swirl wrap top and a matching midi skirt.

Meanwhile, Amanda teamed the look with a pair of simple nude heels.

Showing off her outfit on Instagram, she playfully posed backstage at the London office.

The TV star appeared every inch confident as she flashed her leg for the cheeky shot.

And fans loved the look!

Taking to social media, one shared: “What a fun dress. You look gorgeous in those colours. Great legs!”

Meanwhile, it hasn’t been an easy morning for Amanda.

During Thursday’s show, she fell for a hilarious April Fools prank live on air.

The prank started with fake caller Tom dialling in to propose to his girlfriend Sarah.

However, the pair were actually actors.

Things soon unraveled as Sarah revealed the two had previously “split up” over Tom’s obsession with Amanda.

At one point, things got heated as Tom began to reminisce on meeting the BGT judge.

Amanda then screamed: “Oh God! I felt so sick at that. You absolute [bleep] bags.”

Meanwhile, earlier this week, Amanda confirmed she has landed her own BBC dating show.