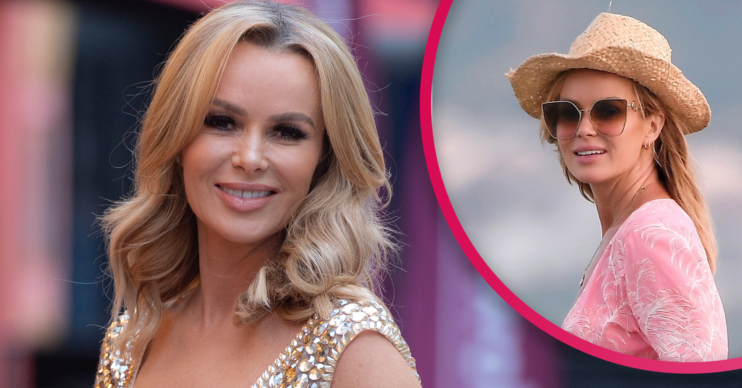 The star's fans jumped to her defence

Amanda Holden has come under fire after posting a picture of her daughter Lexi wearing make-up at the beach.

Britain’s Got Talent favourite Amanda is currently on holiday in a mystery location with daughters Lexi, 15, and Hollie, nine – and presumably husband Chris Hughes.

And it’s the latter that the star has come under fire for.

Although, naturally, Amanda’s army of fans have come out in support of the star and her parenting decision.

Amanda shared a picture of her girls posing on the beach.

Read more: Amanda Holden poses up a storm in a white bikini on holiday

In the picture the girls are both wearing red outfits, with Amanda captioning the picture “#sisters” and adding two red hearts.

Eldest daughter Lexi can be seen wearing make-up, including a gorgeous red lippy, in the picture.

And it’s that which some of Amanda’s followers have taken issue with.

So what did Amanda’s followers say?

Many of the star’s fans commented on how gorgeous both the girls were, and how much they look like their mum.

“Awwwww could they be more gorgeous?” one fan posted.

And then came the barrage of abuse aimed at teenager Lexi.

“Older daughter is so much prettier without make-up,” said another.

“Lipstick on the beach 😢,” another posted.

“Not sure about the make-up on kids!?!?!” said another judgemental follower.

“Lipstick!!” declared another. “Amanda can we have natural beautiful for kids!!”

“Why the red lipstick?” another asked. “They grow up quickly enough without you putting red lipstick on them.”

However, others pointed out that, at the age of 15, Lexi is more than old enough to make her own decisions about wearing make-up.

“She’s old enough to put lipstick on herself,” defended one fan.

Why do you feel the need to comment on the way someone is trying to express themselves?

“Nice comment, I’m sure she’ll take it on board,” said another Amanda fan in response to a troll.

“Either that or she’ll realise that you’re just a rude, judgemental [bleep],” they added.

“Why do you feel the need to comment on the way someone is trying to express themselves?” another retorted.

Others, however, had more pressing matters on their mind after Portugal – where many believe Amanda to be – was added to the government’s amber list.

“Will you have to quarantine when you’re home?” one asked.