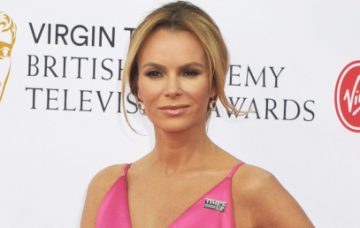 The Britain’s Got Talent judge, 47, was joined by eldest daughter Lexi, 12, as she attended the glam ceremony at the Royal Festival Hall in London.

Amanda was clearly proud to have Lexi with her, sharing a slew of photos to Instagram showing their night out.

And it was a VERY successful night!

And it seems like Lexi could have been a lucky charm!

Amanda couldn’t help noticing how BGT had won the BAFTA in its 12th year, while she was accompanied to the awards show by her 12-year-old daughter.

She shared a touching photo from backstage, showing her holding the award while gazing at her first-born.

Fans were quick to send congratulations to Amanda and the rest of the Britain’s Got Talent team, while also remarking on how much Lexi has grown!

Others couldn’t help pointing out the resemblance between mother and daughter.

Amanda and her husband Chris Hughes also have a daughter Hollie, six.

Hollie wasn’t at the glitzy ceremony this year – perhaps just a bit too young, still!

Amanda said last year that Lexi wasn’t keen in following her mum’s famous footsteps, but little Hollie already wants to be an actress!

She told Daily Mail’s You magazine: “The other day [Hollie] came up to me and said: ‘Mummy, I have good news and bad news. The bad news is that Lexi wants to be a vet. The good news is I want to be an actress.’

“I’m looking at her thinking how thrilled I am that Lexi wants to be a vet and also: ‘Oh no, she is me! Another me is being launched on to the world…'”

Was BGT a worthy winner? Are you enjoying the new series?  Leave us a comment on our Facebook page @EntertainmentDailyFix and let us know what you think!