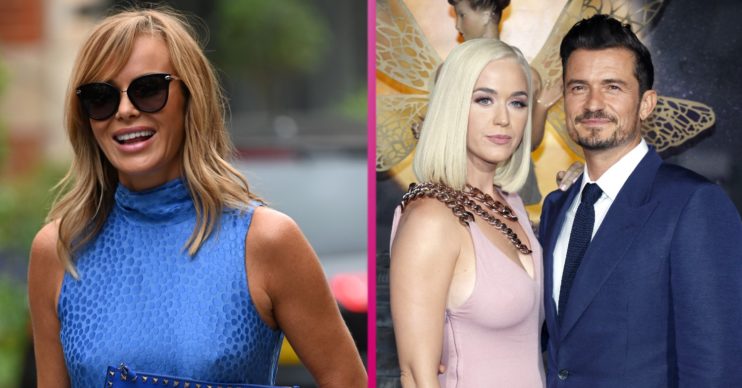 She isn't called Mystic Mandy for nothing!

The TV personality and radio host, 49, accurately predicted Katy, 35, and Orlando, 43, would name their daughter Daisy.

Amanda shared her delight at being right on social media.

Sharing in view of her some 1.5 million Instagram followers: “I love @katyperry’s face when I correctly predict her baby’s name back in June.”

In the clip Amanda and co-host Jamie Theakston, 49, are interviewing a heavily pregnant Katy on Heart Radio.

Amanda calls herself ‘Mystic Mandy’ for her psychic abilities

Katy keeps mum about the name but her eyes open wide when Amanda suggests a name.

Jamie asks: “Have you got a name by the way?”

Amanda urges: “Don’t tell anyone the name. Because everyone judges you.

“Everyone goes, ‘don’t call them that, our school bully was called that’.

“Or I hate this person called that. Everyone has an opinion.”

Jamie replied: “Jamie can be for both. You can’t wiggle out of that one!”

Katy and Orlando made the big announcement via the charity UNICEF

Katy explained: “I know. We have a couple of ideas.”

Jamie asked: “What about Malcom? Or Derek?”

Then Amanda suggested: “I like Daisy Bloom. Because I think the surname of Bloom and daisies and Perry-Bloom is a brilliant hyphen.”

He posted it firstly on the official account of UNICEF, for which both he and Katy are patrons.

He shared that his daughter is called Daisy Dove Bloom.

The photo’s caption includes: “Welcome to the world, Daisy Dove Bloom! We are honoured to introduce Goodwill Ambassadors @KatyPerry and @OrlandoBloom’s new bundle of joy.⠀
⠀
“We are floating with love and wonder from the safe and healthy arrival of our daughter,” Katy and Orlando told us.

As for Amanda’s prediction several users commended the former actress on her clairvoyant abilities.

One user wrote: “Mystic Mandy strikes again” and another joked: “You should’ve gone to the bookies with that one.”