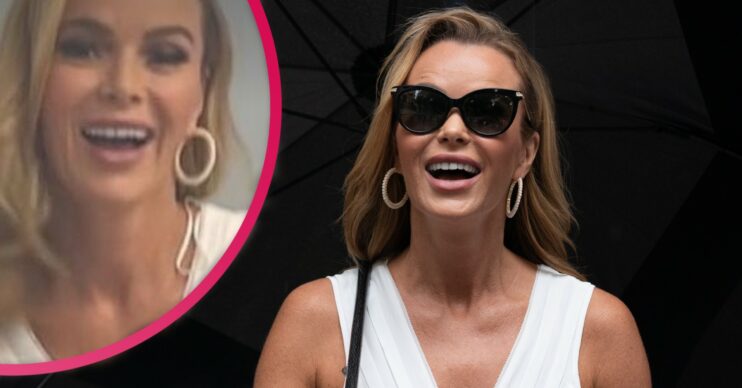 It was a VERY glam day at work today

Regularly whipping up her legions of fans into a frenzy thanks to her impeccable style choices, Amanda also errs on the side of saucy from time to time.

And today (September 14) the 50-year-old star channelled her inner Marilyn Monroe as she flashed her knickers at fans!

Dressed in a very stylish white gown, the dress recalled memories of legendary Hollywood bombshell Marilyn Monroe in the 1955 comedy The Seven-Year Itch.

In that classic film, Marilyn wore the same sort of figure-hugging outfit and got caught standing above an air vent.

Her dress rode up as a blast of air shot upwards and almost revealed her modesty.

And Amanda, wearing a Reiss dress, tried to mimic that classic movie moment.

Smiling and twirling for the camera she captioned one image: “It’s a #marilynmonroe kinda day.”

As if her work day at Heart FM couldn’t get any more glam or saucier, Amanda then treated fans to a short video.

In it, she twirled away again for the camera.

And subsequently, wearing strappy white heels, she lifted up her dress and flashed her toned legs and even her knickers to her fans.

We’re used to Amanda Holden on Instagram and her sense of fun.

But this week she also opened up about her ongoing dental problems.

She told The Mirror that a wisdom teeth operation four years ago had left her with a lack of sensation on the left side of her bottom lip and her jaw.

Thankfully, after a scan, dentists told her that she did not suffer nerve damage and that the feeling should return.

“It’s bizarre but you get used to it,” she said.