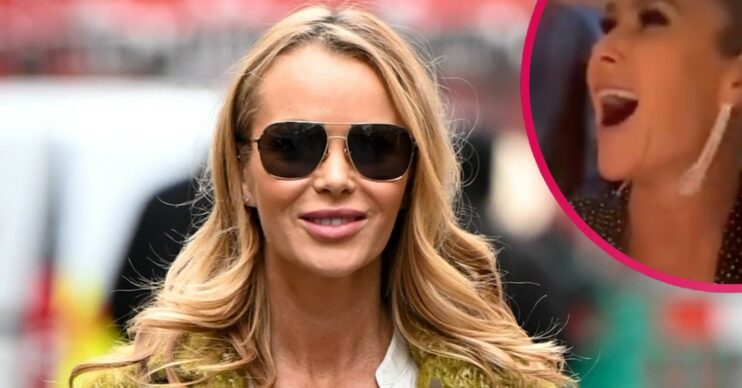 The bash ended with a handstand in a nightclub

Amanda Holden has enjoyed a wild and belated party to mark her 51st birthday.

The star’s big day was more than a week ago but she spent it in Dubai with her husband and daughters.

Now she is back on home turf, Amanda refused to leave the celebrations overseas.

On Friday night (February 26), the mum-of-two gathered her best girl friends together for a dinner.

The gang, which included her Heart FM co-star Ashley Roberts, were treated to a slap up meal and plenty of wine.

Amanda was then left squealing after being surprised with a very saucy birthday cake.

Shaped like Amanda’s own boobs in a black bra, it featured one burning gold candle.

Amanda has since shared a video on Instagram, filmed at the exact moment it was presented to her.

She screeched, “Oh my god” as her friends gathered round to sing Happy Birthday.

But the fun didn’t stop there.

Britain’s Got Talent star Amanda has also shared a wild clip filmed after the party moved on to a nightclub.

The footage is captioned: “Nothing to see here. Just @noholdenback doing a handstand in the club.”

Amanda can just be made out as she attempts the gymnastics move while a bouncer helps and her friends clap.

The star has since reflected on Instagram: “So many amazing women in my life.”

What are Amanda Holden thoughts on getting older?

Amanda turned 51 on February 16 and had jetted out to Dubai for the occasion with hubby Chris and daughters Lexi, 16, and Hollie, 10.

While in the UAE, she proved that age is just a number by slipping into a pair of leather hot pants with metal chain detailing.

She also wore a sheer top with a black bra and filmed a racy video for her TikTok followers.

When she was 38, Amanda declared: “I don’t see the point in growing old gracefully.”

Then last year, ahead of her 50th birthday, she told OK!: “I love that people are still talking about my tired old breasts and I’m nearly 50.

“Age is totally irrelevant, thanks to people like J Lo – a hot woman who dresses for how she feels.”