The Britain's Got Talent presenter, 48, farted as she was dancing on the radio show this morning.

As the star danced in the studio to Fragma's track Toca's Miracle, she broke wind and mouthed the words "I've farted" to Ashley Roberts, Heart's showbiz expert.

Amanda then moved away from her seat and started fanning the air.

The Heart Radio's official Twitter page shared a video of the hilarious moment.

It was captioned: "Caught red handed!! In honour of #Frozen2@AmandaHolden 'Let it go.'"

Every time someone rings the doorbell she has to put her dressing gown on really quickly and then when they leave, she takes it off.

Amanda saw the funny side to the video being shared online and wrote on Twitter: "Better out than in." 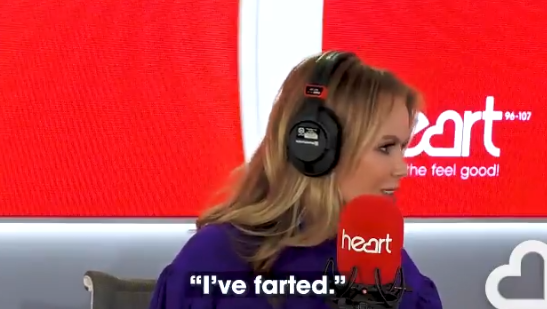 Last week, Amanda was joined by her daughter Hollie on the show.

However, the mum-of-two was left gobsmacked when Hollie, seven, revealed her famous mum is always naked at home.

Hollie then revealed Amanda only throws on a dressing gown when there's a knock at the door!

Amanda's co-host Jamie Theakston asked Hollie: "What does mummy do that embarrasses you the most?"

Hollie replied: "She goes naked all around the house," as Amanda gasped and burst into laughter.

.@AmandaHolden gobsmacked as daughter Hollie, 7, reveals she is always NAKED at home... and only throws on a dressing gown when there's a knock at the door 👀🙈😱

Jamie said: "Oh dear oh dear, that wasn't what I was expecting! How do you feel about that, Hollie?"

Hollie admitted: "I just get annoyed," to which Amanda said: "Do you? Do you think I need to put something on?"

Jamie asked Hollie: "What do the neighbours make of that? Or the window cleaners... does that cause any problems?"

Hollie revealed: "Well, every time someone rings the doorbell she has to put her dressing gown on really quickly and then when they leave, she takes it off." 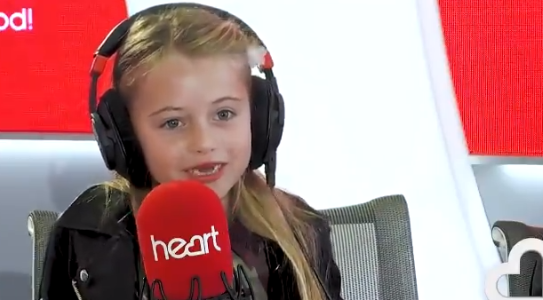 Bursting out in hysterics, Amanda admitted: "I like to feel free. What can I say?"