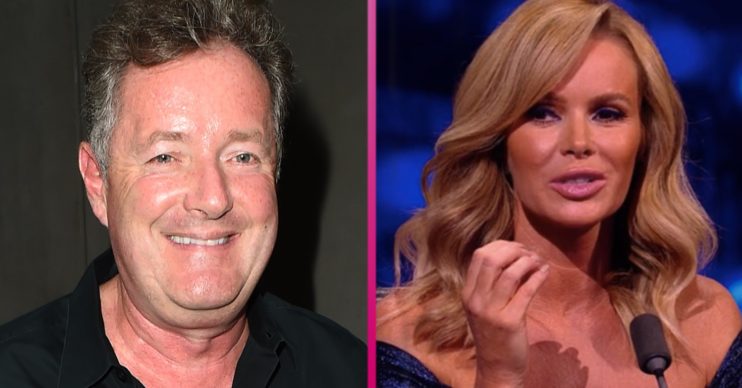 Amanda Holden says she once accidentally flashed her boob to Piers Morgan and one of his sons.

Amanda says one time while visiting Piers’ home in Los Angeles, one of her breasts accidentally popped out.

But thankfully, dad-of-four Piers was able to see the funny side.

What did Amanda Holden do?!

Speaking to The Sun, Amanda explained: “Actually he saw them once because I went round for dinner with my kids and (husband) Chris at his house in LA, and I was chatting to one of his sons and one fell out.

“And Piers was like: ‘Er, Mandy, can I just point something out? You’re talking to my son.'”

However, Amanda refuses to back down despite negative backlash against her cleavage-bearing  outfits.

She quipped: “People have been banging on about my [bleep] for a decade now, and I’m nearly 50.”

Why are Brits complaining about Amanda?

Her revealing outfits have resulted in Ofcom complaints on several occasions.

On last Saturday’s episode, some viewers believed they could see her nipples peaking out of her dress.

In fact, the show received 235 complaints specifically about her cleavage displaying dress.

And back in 2017, her plunging black dress worn on BGT became the most complained about TV moment of that year.

How has Amanda reacted to the complaints?

But Amanda has continually laughed off the criticism and continues to flaunt her incredibly toned and youthful physique.

She told OK! magazine last year that she actually finds it all rather amusing.

Speaking to the mag, she said: “I love it that people are still talking about my tired old breasts and I’m nearly 50!”

She added that her two daughters remain unbothered by their mum’s cheeky outfits.

Amanda continued: “I try not to think about age anymore when I’m dressing. My children don’t bat an eyelid at what I wear and love borrowing my clothes.”

And she’s just as blasé about last week’s complaints.

She told the Mail that she is most annoyed that some viewers reckoned she has large nipples.

“I was more insulted that people thought I had either huge saucepan nipples or nipples over my cleavage.”