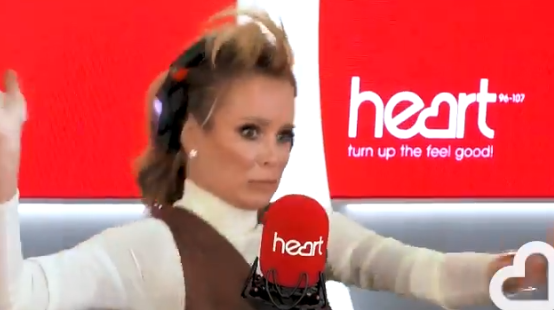 Her boots slipped on the chair

Amanda Holden accidentally fell off her chair live on air during this morning’s Heart Breakfast Show.

The Britain’s Got Talent judge was discussing Gary Lineker recently saying “pushy” parents should stop shouting at their kids from football pitch sidelines.

Amanda said: “I didn’t know whether you being at the sidelines and shout…” before suddenly falling off her chair.

Ummm, are you okay?! @AmandaHolden just fell off her chair live on Heart Breakfast! #Ouch 😂👀🙈

Her co-star Jamie Theakston burst into laughter and said: “Are you okay?! We have just had a minor workplace accident.

“What did you do just then? Did you fall off your chair?”

Managing to get herself back up onto the chair, Amanda explained: “I have cowboy boots on and I just put my foot on the [chair adjustment handle] and I missed the stirrup.”

Jamie said: “Well, they’re not very good for a cowboy boot. That’s the sort of thing you imagine they should be able to do.”

As the star danced in the studio to Fragma’s track Toca’s Miracle, she broke wind and mouthed the words “I’ve farted” to Ashley Roberts, Heart’s showbiz expert.

Amanda then moved away from her seat and started fanning the air.

The Heart Radio’s official Twitter page shared a video of the hilarious moment.

It was captioned: “Caught red handed!! In honour of #Frozen2@AmandaHolden ‘Let it go.'”

Amanda saw the funny side to the video being shared online and wrote on Twitter: “Better out than in.”

Last week, Amanda was joined by her daughter Hollie on the show.

.@AmandaHolden gobsmacked as daughter Hollie, 7, reveals she is always NAKED at home… and only throws on a dressing gown when there’s a knock at the door 👀🙈😱

However, the mum-of-two was left gobsmacked when Hollie, seven, revealed her famous mum is always naked at home.

Hollie then revealed Amanda only throws on a dressing gown when there’s a knock at the door!

Amanda’s co-host Jamie Theakston asked Hollie: “What does mummy do that embarrasses you the most?”

Hollie replied: “She goes naked all around the house,” as Amanda gasped and burst into laughter.

Jamie added: “Oh dear oh dear, that wasn’t what I was expecting…”