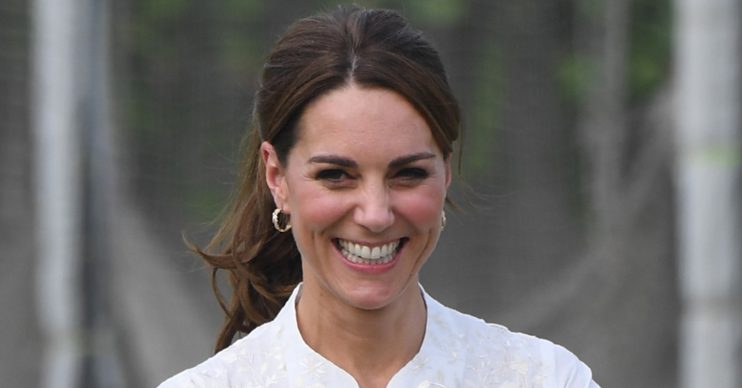 Cementing her status as a royal style icon, the Duchess of Cambridge’s fashion choices have stolen the show during her visit to Pakistan with husband Prince William.

Arriving in Islamabad, Kate looked as fresh as a daisy when she stepped off the RAF Voyager with William by her side.

Royal fans commented that she looked “breathtaking” in her stunning aqua shalwar kameez – a traditional Pakistani outfit comprised of a flared kurti, a long shirt and trousers – by British designer Catherine Walker.

Read more: Ant and Dec meet the Guide Dog puppies who are named after them

Kate stuck with tradition as she and William visited a girls’ school on their first full day of the tour.

Her elegant blue kurta and scarf, with white embroidery around the neckline, was made by local designer Maheen Khan.

The designer told BBC Urdu: “As far as my designs for the duchess are concerned, I didn’t have any particular idea or colour in mind.”

She added: “I understood that she needed something simple, classical because she’s fond of elegance.”

Read more: The Tesco toy sale kicks off today and there are bargains aplenty to be had

Explaining the choice of colour for the outfit, she continued: “I chose periwinkle blue – it’s a beautiful blue. And I thought the duchess’s dress should reflect our Pakistani culture.”

Kate pulled out all the stops when she attended an evening reception at the Pakistan National Monument later that night.

Climbing out of a tuk tuk, the duchess stunned in head-to-toe green sequins.

Her full-length, glittering Jenny Packham gown featured billowing sleeves gathered at the cuffs and was show-stopping, to say the least.

I chose periwinkle blue – it’s a beautiful blue. And I thought the duchess’s dress should reflect our Pakistani culture.

The next day the pair headed into the foothills of the Himalayas. Arriving by helicopter, Kate opted for a practical outfit, that was also super-stylish.

She teamed a long chestnut brown skirt and a darker shirt with a leather vest and opted for flat knee-high boots suitable for the rocky terrain.

It was during this part of the tour that Kate was also seen wearing two traditional hats.

First she wore a Chitrali hat, usually reserved for men, but worn by Kate and her late mother-in-law Diana, Princess of Wales, during one of her visits to the country.

Later in the day, Kate and William visited the Kalash Valley and was given a colourful cap traditionally worn by Kalasha women.

Keeping it traditional as she visited one of the world’s biggest mosques in Lahore the following day, Kate was pictured wearing a green shalwar kameez, once again by Maheen Khan.

Kate also wore a headscarf and happily walked around the site barefoot in the outfit, which featured intricate gold embroidery.