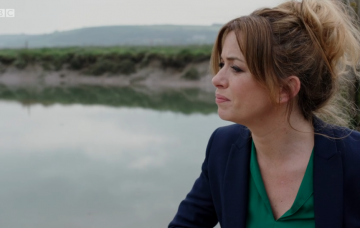 All about Eve Myles from Keeping Faith

The BAFTA-winning Torchwood actress admitted she had a “bit of a wobble” after performing for two decades, feeling “bored and frustrated” at missing out on some plum roles.

But now the 39-year-old reinvigorated and “back on the right path” by the success of Keeping Faith on Welsh TV and iPlayer.

“I love my job, so… hurray!” she said during a recent interview on This Morning.

And having consulted her own dubious midwife about possible future career prospects in that profession, Eve agrees she was rightfully warned off.

Eve joked: “She turned to me and said: ‘Eve, what makes you think a woman in the late stages of labour wants to look down and see Gwen Cooper between her legs?”

Well, Torchwood did have a very enthusiastic following, so maybe some pregnant fans might choose that option for childbirth.

What is Keeping Faith all about?

First broadcast last November on BBC Wales, Keeping Faith smashed all expectations when it became the most popular show on the channel for 25 years.

Around 300,000 viewers turned on for each episode – but it was the number of people watching on iPlayer that really raised eyebrows.

Keeping Faith is believed to have racked up over 10million on the on-demand service and has been described as a “game-changing” thriller by critics.

But when her husband – and colleague in the family law firm – never returns home after kissing his children and wife goodbye as normal one morning, the tone of the series changes dramatically.

What Eve believed her life to be becomes clouded, especially after she learns husband Evan had debts of £60,000 and taken out a lucrative insurance policy.

Eve has described Keeping Faith as a “project about humanity, love, loss and survival of a mother of three”.

Certainly, it seems to be a passion project for her – and not just because it re-energised her ardour for acting.

Rather than studying midwifery, the Powys-born star – who previously didn’t speak a word of the language – learned Welsh.

That’s because Keeping Faith was shot twice, back-to-back, in both Welsh and English for two versions of the same show.

Unsurprisingly, a second series is in development.

Where have you seen Eve Myles before?

Eve’s first major TV role was as Ceri in long-running Welsh drama series Belonging. Following the lives of the Lewis family in South Wales, she appeared in all nine series between 1999 and 2008.

A supporting role in a 2005 episode of Doctor Who was to launch her to a whole new audience though.

Bringing her to the attention of show boss Russell T Davies, he went on to bring her into spin-off show Torchwood.

Eve went on to appear as Gwen Cooper in every episode of Torchwood’s four series run, with the ‘audience surrogate’ character positioned as the heart and conscience of the sci-fi show.

Other TV credits include roles in Merlin, Little Dorrit, Victoria and A Very English Scandal.

She is also a highly-acclaimed stage actor, with performances for the RSC and National Theatre bringing her waves of plaudits over the years.

What’s next for Eve Myles?

An appearance in Cold Feet is upcoming, with Eve playing a character said to be based on columnist Caitlin Moran.

And while hopes are high for a Keeping Faith return – not yet confirmed – a comeback for Gwen Cooper seems unlikely.

Eve, however, hasn’t ruled it out. After all the part was written especially for her by the showrunner.

“It’s a gift from Russell T Davies to me, which I’m very honoured about,” she said in a 2016 interview.

She did, however, recently team up with Davies once again for A Very English Scandal, dramatising the life and trial of Liberal MP Jeremy Thorpe.

Are you an Eve Myles and Keeping Faith fan? Leave us a comment on our Facebook page @EntertainmentDailyFix and let us know!