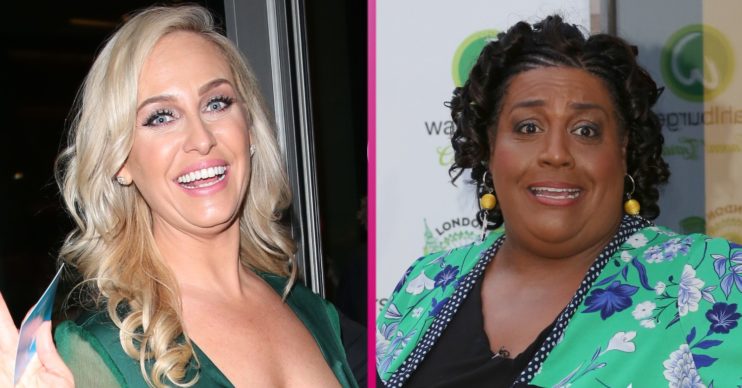 The This Morning pals are so funny together

Alison Hammond has left fans chuckling after sharing a new picture of herself and Josie Gibson.

The This Morning pals posed for the snap while out and about and it has really tickled Alison’s followers.

In the selfie, Josie can be seen as clear as day. Unfortunately, the same can’t be said for poor old Alison!

Posting the shot on Instagram, Alison teased: “I gave @josiegibson85 one job to take a nice pic and she blurred me out love her.”

Fans have been quick to comment on the amusing picture – and some even want them to have their own telly show!

One follower wrote: “You two should be a double act.”

Another added: “Love you two together… move over Ant and Dec!!!”

Meanwhile, others called for the pair to have their own show with one person saying: “You two should have your own show.”

Another agreed: “You ladies should have your own show,” while a one suggested: “What a pair you two are, great TV I’m thinking a show.”

Alison lands her own show

Alison has actually landed her own show, albeit without Josie by her side.

Last month, we told how the presenter – who found fame on Big Brother in 2002 – has landed her own prime time special.

Excited to announce that I'm working with @ITV to bring you Alison Hammond: Back To School! I'm travelling to key historical sites across Britain – from Hadrian's Wall to Hampton Court – to learn about black figures throughout the ages who have been overlooked in the pages of British history. I'll be meeting with expert historians to get an insight into the significance of black people in British history and I'll be exploring the current teaching of history in our schools. Stay tuned…

The one-hour show is called Alison Hammond: Back To School.

It will air on ITV next month as part of the channel’s Black History Month programming.

An ITV rep explained: “Alison Hammond goes on the ultimate school history trip with a twist.

“In her own unique and inimitable style, for this peak-time commission, Alison will be travelling the length and breadth of Britain to key historical sites – from Hadrian’s Wall to Hampton Court – looking at the history we’re all taught in schools, but from a different angle.”

Congratulating her, one fan replied: “Can’t wait to watch it, Alison. It’s going to be a corker!”

Another added: “You go girl! This is going to be fantastic!”

Taking to social media, the mum-of-one shared a photograph of herself relaxing in a hot tub – at 5am!