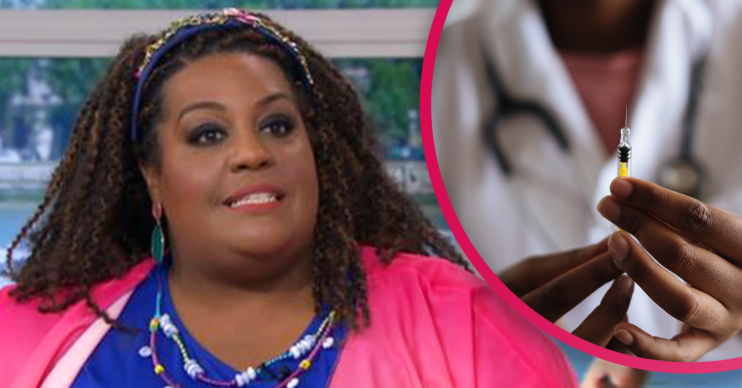 She's reacted to plans to offer the vaccine at Thorpe Park

Alison Hammond has divided followers after she reacted to the news the government will offer COVID-19 vaccines at Thorpe Park.

The This Morning host – who is currently on a summer break – shared a meme to Twitter, seemingly rolling her eyes at the news.

The post came in reaction to the announcement from vaccine minister Nadhim Zahawi.

What did Alison say about the COVID-19 vaccine?

She posted a gif of a sportsman rolling his eyes and shaking his head.

His tweet read: “From today, all those on a trip to @THORPEPARK will be able to get a COVID-19 vaccine, in between queuing for rides or enjoying a bite to eat.

“Our vaccines are protecting millions from COVID-19, preventing infections and serious symptoms.

How did Alison’s followers react?

It’s fair to say they were divided – with many expressing their surprise at her views.

One said: “Irresponsible response from a loved TV personality.”

Another asked: “Have you not had yours? This Morning will be needing to find someone else to fly to different places.

“Surprised at your response!” stated a third. “One person I really didn’t think would be anti-vaccine.”

Another issued a warning to Alison.

“Be mindful Alison what you get involved in …this is a sensitive issue,” they said.

“Urgh, not you too,” said another.

Was anyone on her side over the vaccine plans?

Some Alison fans did have the star’s back.

One said: “I’ve had my two vaccines, but this is a crazy idea.

“People who want the jabs should get it done by medical staff in the proper environment, not in a damn theme park, that’s just crazy!!

“Jabs ‘while-u-wait’ then jump on a ride? No. Just no. Supposed to take paracetamol, water, rest!” they declared.

Another responded to those who asked why Alison had posted the tweet.

“She is a human being entitled to her own opinions. If she has serious concerns she is free to express them,” they said.

So what do you think? Join the debate on our Facebook page EntertainmentDailyFix.