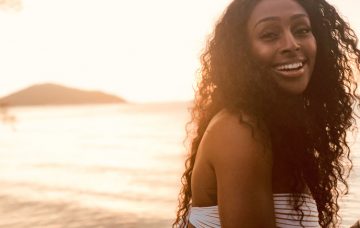 Strictly Come Dancing finalist Alexandra Burke has kicked off 2018 with a thoughtful and heartfelt blog post.

She began the post on her official website by acknowledging that it’s her first entry in a while, claiming this is due to keeping herself too busy.

“I haven’t allowed myself to be still and just think,” she wrote, before looking back the the past year.

“So much has changed in my life in such a short space of time,” she said. “It has changed me as a person.”

She continued, thanking her fans for their support during 2017 – which turned out to be a rough year for her.

“I can’t thank you all enough for your support. Your kind words – the tweets, Instagram comments and Facebook comments.

“I read them and feel so much love and comfort and I want you all to know how much you have helped me fight my own mental battles this year.

“This is a moment of reflection. Giving thanks and trying to stay positive.”

She encouraged people to start the New Year with energy and positivity.

“Life is going so fast,” she wrote. “The years – the days – the minutes. So make the most of not only what you have but more importantly whom you have around you. Surround yourself with positivity and love. Nothing less. Because that’s what you deserve.”

This comes after a tough few months for Alexandra. She lost her mother in August, just before she was due to start filming Strictly.

Her time on the show was marred by intense criticism from some viewers, who claimed her reactions to feedback were over the top and fake.

She vehemently denied that, saying she was completely genuine.

Alexandra was one of the show’s four finalists, eventually losing out to Joe McFadden, but she has called the experience a dream, and congratulated Joe on Twitter.

She ended her blog post wishing love to her fans, and looking forward to a brand New Year: “I send this with so much love and light. And hope that whoever reads this blog knows they’re loved.

“Let’s make this year one to remember.”