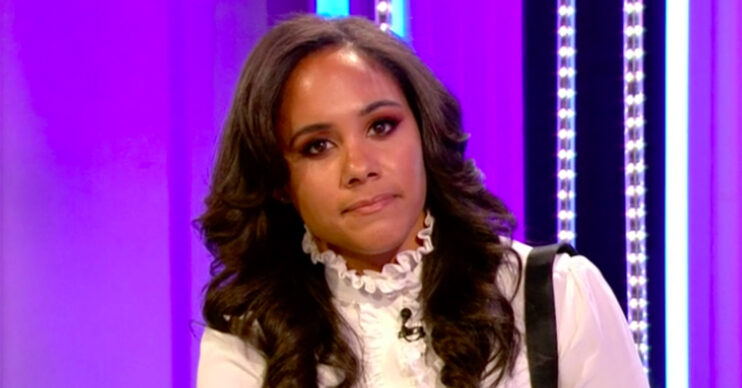 Alex Scott has opened up about horrendous online abuse she’s received throughout her broadcasting career.

The former Strictly 2019 contestant, 35, spoke about her experiences on The One Show.

Filling in for Alex Jones, she directly addressed being trolled.

The former professional footballer talked about it in relations to her mental health.

It was part of a segment on The One Show for World Mental Health Day.

What did Alex Scott say about trolls?

Jermaine Jenas asked Alex about her experience with trolls, and said he knew she’s experienced it in the past.

He said: “I know on one of the very first shows we worked on, Football Focus, you were getting trolled at that particular time on Twitter.”

Additionally, Alex confirmed that she’s suffered from plenty of trolling over the years.

Read more: Katie Price feared for her life as she checked into The Priory

However, she says she had always tried to conceal that it personally hurt her from others.

Alex explained: “Yeah, I think what we’ve heard and with everyone speaking out about it now, is I was trying to hide it.

How does Alex deal with negative online comments?

“I was trying to be brave, put on a brave face but I was really struggling and I know it’s now been documented about my mental health issues.

Before adding: “It was a really tough time and for me the message is: it’s okay not to be okay.

Read more: Prince Harry ‘set to return to the UK within weeks’

“Everyone goes through different things and it’s a way of dealing with it and I have to thank people who still reach out to me to show their support.”

But she says that she has never received abuse from her colleagues – but rather viewers at home.

Alex continued: “I don’t get the abuse from my colleagues who I’m working with. I feel respected in this environment, but it’s from the other side where people are not in this environment. It has, it’s been really hard to deal with.”

The trolling has unfortunately amped up in recent weeks as she ‘s hotly tipped to replace Sue Barker on A Question of Sport.

And Alex is one of the top contenders rumoured to be heading the new line-up.

However, this led to horrible online abuse targeted at the star.

But she responded by posting a moving poem she wrote herself to her Instagram stories.

Whereas lines include: “I was that girl that played football, with no regards to the colour of my skin.

“I was that girl that played football because I always wanted to win.”

A Question Of Sport Alex Scott Strictly The One Show