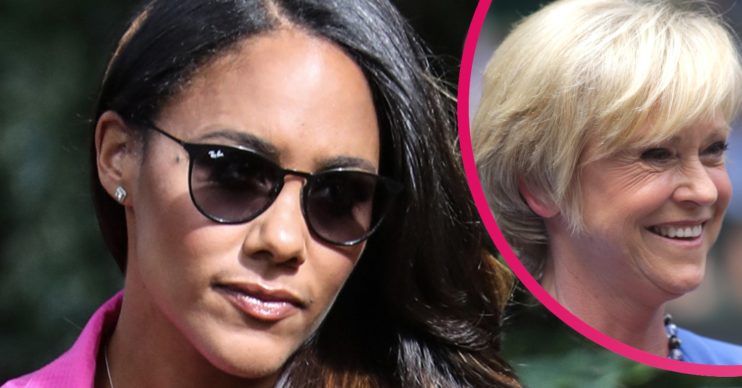 Alex hit back at 'negative energy'

Alex Scott has been inundated with support after she broke her silence about those A Question of Sport rumours.

The sports pundit and former Strictly contestant, 36, has long been mentioned as a contender to take over from Sue Barker.

And now, addressing the reports, she has begged for less “negative energy” on social media.

“NO I am NOT taking over from Sue Barker on QOS, who I have also watched for many years and loved.

Read more: What has Sue Barker said about leaving?

“So on this lovely, fine Saturday, stop with the negative energy and keep it moving please… because I have no involvement in the situation.

What did fans say about the news?

Alex’s fans rushed to wish the star well, as well as share their disappointment that isn’t joining the new series.

Read more: Who is Alex Scott dating as she’s linked to Corrie star?

One user tweeted: “Don’t let the negativity affect you, there are so many more people who support you and think you’re fab!!!”

While another user replied with: “Well that sucks, because there aren’t many that Sue could have passed the QOS baton to, you’re one of the very few.

“Just like her, you’re a living sport encyclopaedia Alex!”

A third user commented: “Two things upset me about this. 1. Why shouldn’t you take over – you’d be amazing. 2. I can’t believe it’s got to point where you’ve even have to tweet this, very unfair on you. You’re turning into a great presenter and insightful pundit. Keep it up!”

And a fourth user posted: “You’d be great on it Alex if the chance came in the future, but damn these trolls are something else.”

Indeed, ever since Sue announced she was stepping down from A Question of Sport back in September 2020, rumours ran rife about who would replace her.

And Alex was immediately reported as a top contender for the prestigious role.

However, the former professional footballer said this led to vile and often racist abuse online.

NO I am “NOT” taking over from Sue Barker on QOS, who I have also watched for many years and loved

So on this lovely, fine Saturday, stop with the negative energy and keep it moving please…because I have no involvement in the situation

In fact, after Gary Lineker wrote a congratulatory tweet to Alex (despite no official confirmation from the BBC), horrific troll abuse ensued.

Alex responded with the upmost dignity. She posted a poem that she wrote in 2018 on social media.

“Now I talk about football live on your TV, some want to say I’m ticking a box, but that’s not me. Football is football and that is what I see. Hi, Hello, I’m Alex Scott and you know what, football is me.”