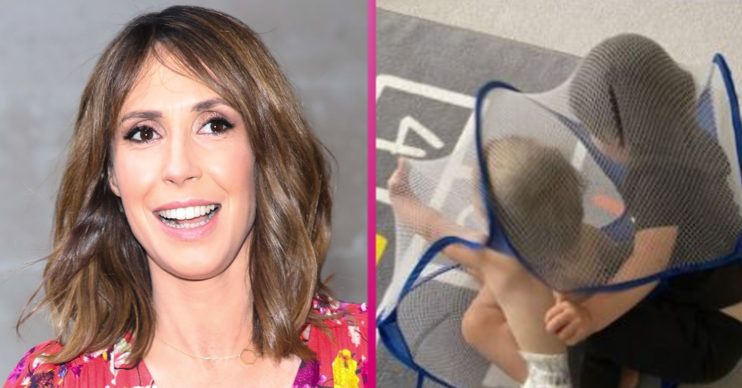 The One Show host shared the picture on Instagram

Alex Jones has posted a hilariously heartwarming new photo of her sons Teddy and Kit.

On Instagram, the BBC presenter, 43, shared a new picture of her three year old and his little brother, 15-month-old Kit, showing them playing together.

Teddy sits closely behind his younger sibling as they struggle for space inside a mesh basket.

Both boys’ faces were turned away from the camera in the photo. Alex is yet to share her sons’ faces fully on Instagram, although she regularly posts about her family.

Recently, the star enjoyed a break from The One Show. While off, she had a holiday with her boys, husband Charlie Thomson and her parents.

She shared a number of pictures from the trip, telling fans in the caption of one: “Very grateful to have had the best two weeks. Maybe the best holiday yet.”

Another showed baby Kit walking hand in hand with his granddad on a beach.

Gethin Jones joining Alex as a permanent host of The One Show?

Gethin remains among the favourites to be hired as a permanent host on the show.

Last month, after continuing to prove a hit with viewers, the 42 year old teased that the BBC could choose him as Matt’s replacement.

He told OK! magazine: “I think it’s all up in the air at the moment because of the pandemic. I don’t know what the plan is, but I’ve really enjoyed it.

“I love working with Al. I’ve known her since I was 18 and my first ever TV job was with her.”