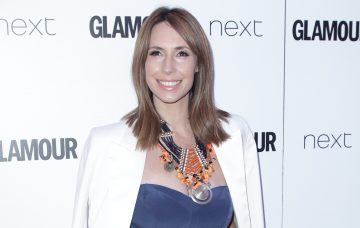 Her son has just turned one

She was delighted to become a mother for the first time last year, but Alex Jones has admitted parenting hasn’t been all sunshine and roses.

In a refreshingly honest Instagram post, The One Show host has admitted that becoming a mum has felt “so bloody hard at times” with numerous “highs and lows.”

Her message comes as she promotes her new parenting book, out in April, which she hopes will help others cope with the realities of parenthood.

Revealing the book cover to her 97K Instagram followers, Alex said: “So here it is. After a lot of blood, sweat and tears, my book had gone to print and I can finally reveal the cover of ‘Winging it’.”

She added: “What a year it’s been. An epic journey of guessing how to raise a baby whilst writing and editing my first book. I couldn’t have done it without your support and stories so thank you from the bottom of my heart.

“It’s undoubtedly been the best year but so bloody hard at times and so this book is a very honest account of the last 18 months. The highs, lows and everything in between. (I’m worried now that it’s a bit too close to the knuckle but hey ho, what’s done is done.)”

We can’t wait to read it, as Alex continued that she hopes it will be “helpful for all you parents-to-be and a good old laugh along tool for readers who are already in the same boat!”

The 40-year-old presenter had feared she may have left it too late to become a mother as she didn’t met her husband Charlie Thomson till she was in her late thirties.

She then discovered her own mother had the menopause in her early forties, and said she feared she could follow suit.

Luckily for the couple, Alex conceived when she was 39 and their son Teddy arrived in January 2017.

As well as being a mum and writing her parenting book, Alex also returned to her job on The One Show after just three months maternity leave.

So it’s no wonder it’s been such a hard year for her. The sleepless nights and juggling childcare hasn’t put her off having anymore babies though.

Read more: Cheryl strikes a pose after pal says she’s in a “good place” for comeback

She said she’d love to be able to give Teddy a brother or sister in the future if the couple were blessed enough to have it happen.