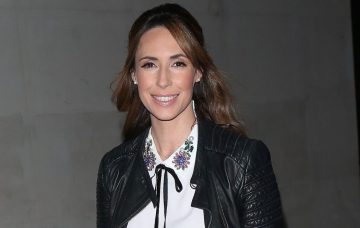 The lovely mum would like to add to her family

She became a mum for the first time in January, 2017 and prior to that had spoken candidly about her fears about her fertility and whether she would ever have children.

Now, The One Show’s Alex Jones has revealed she would love a second child but, as yet, it just hasn’t happened.

Speaking to the Sun on Sunday’s Fabulous magazine, Alex, 41, said that in an ‘ideal world’ she would have met her husband of three years, Charlie Thompson, ‘a lot sooner’ so they would have been younger when they started their family.

“I always knew I wanted a family, but I still felt really young,” Alex told the magazine.

Revealing that the couple would like to welcome a little brother or sister for their son Teddy, who is now almost two, Alex admits that getting pregnant for a second time has not been as straightforward as it was previously.

“I have to say, the first time – absolutely fine. Luckily, God, it happened,” she said.

“But second time, not as easy. I suppose I’m older now, but we took it for granted that it would be OK. But you don’t really know until you start trying how it’s going to go, do you?

Alex announced her pregnancy with Teddy – full name Edward Alun Burrell Thomson – with a sweet message on Twitter in September, 2016.

She wrote: “Charlie & I are very happy to confirm that we’re expecting a baby in the new year. Feel so lucky that we’re about to become parents.”

The proud mum then broke the news of Edward’s arrival the following January with a telephone call to The One Show, telling  presenters Matt Baker and Angela Scanlon that she had “some news” before announcing, “Our beautiful, healthy little baby boy was born”.

Alex later returned to work just three and a half months after Teddy’s birth, something she later said was too soon – but revealed she did it because she felt “insecure” about her job, and was worried about being replaced.

“To be fair, the BBC were really supportive, they were amazing. They said, you have as much time off, and when you’re happy to come back then we’ll be glad to have you,” she told Graham Norton on his Radio Two show.

“And I was just insecure, and thought, I need to get back as soon as I can. And in hindsight, yeah, I did go back too quickly.”

Did you have a bit of a struggle to fall pregnant for a second time like Alex? Leave us a comment on our Facebook page @EntertainmentDailyFix and let us know.