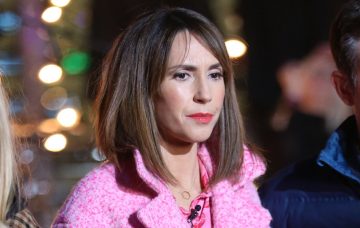 The One Show’s Alex Jones has recalled how she fled a supermarket in tears after a woman made an unhelpful comment about her sobbing son.

The 41-year-old told Giovanna Fletcher’s Happy Mum, Happy Baby podcast that she’d been frazzled and exhausted when she took her son Teddy to the shops shortly after his birth.

Alex said it had been a struggle enough getting them to the supermarket, let alone doing the shop, and her day was ruined when a stranger couldn’t resist commenting on Teddy’s tears.

“I remember one day, going to the supermarket, and he just had, as babies do, a little meltdown. He was bored of being in the pram and lying down and was screaming going down the aisles,” she said.

“I was sort of carrying him in my arms, trying to comfort him, pushing the pram, putting the groceries in the pram, and this lady turned to me at the checkout and said, ‘I think you need to do something, he’s obviously really hungry or something.’

“And I thought, what a shame. You’re another woman and obviously this baby is tiny and new and I look bedraggled and stressed and instead of saying, ‘Oh God, isn’t he cute?’ or, ‘He’ll be better, just walk him around a bit’, some words of encouragement.

“Instead she was really quite snipey. I left the shop and I was in floods of tears because it’s exactly what I’d worried about before leaving the house.

“Every time I see somebody in that situation, I make a concerted effort to give them a warm smile and make them feel we’ve all been there and it will get better.

“It is funny how some people still have little patience for crying babies and little empathy for new mothers, and that’s awful, as you feel out of your depth.”

She’s now written a book about her experiences of parenthood called Winging It! Parenting In The Middle of Life, which she describes as more of a “support manual” than tip book.

Alex recently spoke to OK! magazine about being an older mum, saying she was surprised by the label, and there are benefits and cons to being slightly older when starting a family.

“I’ve got more patience now. I’m in a position where I can provide a better life than I would have been able to ten years ago,” she said.

“If you leave it a bit later than you’re more likely to be at the peak of your career. Jugging the two can be difficult, but it’s okay to say I love my job. I worked hard to get where I am and I want to continue.”

Will you be reading Alex’s book? Leave us a comment on our Facebook page @EntertainmentDailyFix and let us know what you think!