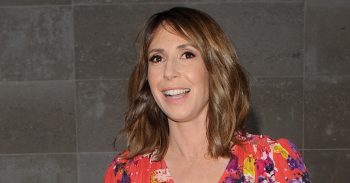 But the presenter seems to think she might be too late...

Pregnant Alex Jones has joked that she’s trying to beat Meghan Markle to give birth before the royal, who is also due any day now.

The One Show host, who revealed she was expecting her second child with Charlie Thomson on the BBC programme back in December, shared a picture of raspberry leaf tea, which is thought to help induce labour and tone the muscles of your womb.

“Trying to beat Meghan… or is it already too late?!” Alex, 42, captioned her picture, suggesting she thinks the Duchess of Sussex has already given birth.

Trying to beat Meghan….or is it already too late?! pic.twitter.com/7lAz6lnGOp

Alex’s post prompted a flurry of tweets from mums, with some saying it worked for them while others offered their own tips on hurrying the baby along.

“I drank loads of raspberry leaf tea when I was at the end of my second pregnancy,” one of her followers replied.

“I still was 14 days late but was only in labour for 50mins so think it helped to have a speedy delivery. Good luck with everything.”

Another shared: “Worked for me first baby 10 days early and quick labour, second baby had to be induced due to medical condition again quick labour.”

I had a Mexican meal 🥘 good luck with the birth. And I think you are right that Meghan has already had the bubba.

I suggest a Thai curry and Eastenders worked for me!

Meanwhile, the Duchess of Sussex is expected to give birth any day now amid reports she’s overdue.

But Prince Harry and Meghan’s baby news will not be publicly announced because the royal couple have said they want to celebrate privately first.

In a statement Kensington Palace previously said: “The Duke and Duchess of Sussex are very grateful for the goodwill they have received from people throughout the United Kingdom and around the world as they prepare to welcome their baby.

“Their Royal Highnesses have taken a personal decision to keep the plans around the arrival of their baby private.”