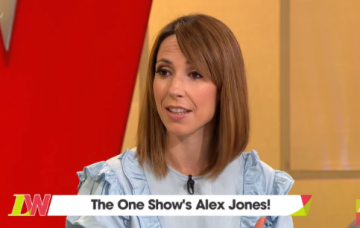 Alex Jones calls for change over labelling of older mums

The One Show presenter didn't like being called geriatric!

She wasn’t far off her 40th birthday when she gave birth to her first son Teddy, so The One Show presenter Alex Jones has had to get used to being called a “geriatric” mum.

Usually the word relates to elderly people but in pregnancy terms, it’s a label for mums-to-be over the age of 35.

But speaking on Loose Women, Alex suggested a different term should be used.

“It’s always nice to be called a geriatric, isn’t it?!” she joked when the subject was raised by Coleen Nolan.

“Of course there are reasons for it because there are certain complications potentially if you are a bit older. But these days I feel things have moved on.”

The 41-year-old presenter added: “I certainly don’t feel old now and didn’t at 39 when I fell pregnant. Maybe we need to rethink the language a little bit.”

In the health sector, older mums are often now referred to as being of “advanced maternal age” rather than geriatric but the term remains one used in the wider world.

Alex pointed out that becoming a mum later in life is not unusual these days.

Statistics published last year revealed that the number of women over 40 in the UK having babies has overtaken the number of those having them at 20 and under for the first time in 70 years.

Alex said she thinks many women are now having babies in their late thirties and early forties because it takes longer to find the right partner.

She admitted this was certainly the case for her, as she always knew she wanted a family but didn’t meet her husband – Charlie Thomson – till her mid thirties.

“People aren’t meeting till they’re older, they’re moving to different cities for careers, so things are gradually happening a bit later. I haven’t found my husband till I was 34 so without him there would be no baby!” she said.

She added that she didn’t rush to have a baby with New Zealander Charlie, 40, who she married when she was 38, as she wanted to be sure he was The One.

“Moving to London, finding Charlie, settling into life together – breaking up, getting back together, should we move to New Zealand? Are we staying in London – it all takes a bit of time.

“(Having a baby) is such a game changer. You need to be sure you are with the right person to travel that path with and it took me a little time to find Charlie.”

The couple now have 18-month-old son, Teddy, and Alex has written a frank book about the highs and lows of motherhood, called Winging It.

On his first birthday back in January, she spoke on Instagram on how their little boy has changed their lives.

Beside a family photo she wrote: “We can’t believe that our little boy is 1 today. What a year it’s been. Teddy has brought more love to our lives than we thought possible.

“It’s also been the steepest of learning curves. We’re so grateful for having this tiny man so big in personality in our world.”

Meanwhile on today’s Loose Women, Becky Vardy talked about taking her kids out of school for the World Cup.

Do you agree with Alex that geriatric is an offensive term for an older mum? Leave us a comment on our Facebook page @EntertainmentDailyFix and let us know what you think!