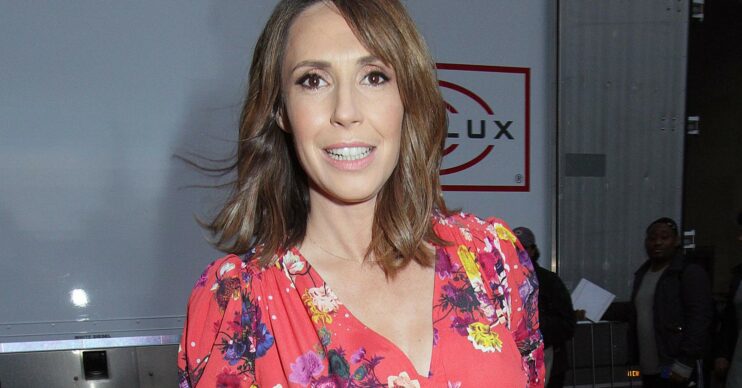 Alex Jones has given birth to her third baby as she shared sweet photos.

The One Show host, 44, announced the happy news to her Instagram on Tuesday (August 24).

Alex told fans she welcomed her daughter on Saturday afternoon and said she and husband Charlie Thomson are “besotted”.

The star wrote: “We have some news… Our beautiful daughter came safely into the world on Saturday afternoon 21.08.21.

Read more: The One Show: Alex Jones responds to criticism over Shakira interview

“Tiny, but perfectly formed we are all beyond happy and besotted by her, especially Ted and Kit.

“Watching them with their brand new little sister is just the best and we can’t believe how lucky we are to have the 3 of them and to be a family of 5.

“It still doesn’t feel real!!! Thank you to everyone at the Queen Charlotte hospital for all your support again, especially super midwife Audrey.

“Name will be incoming soon.”

Meanwhile, last week, Alex said she was being “monitored” in hospital.

Taking to her Instagram Stories, a photo showed Alex and Charlie beaming as wire patches were on her bump.

The star wrote: “Just been brought in to have a bit of monitoring… nothing exciting so far.”

Alex and Charlie are also parents to sons, Teddy and Kit.

A few days ago, Alex shared a touching photo with one of her sons.

She said: “Grabbing all the cuddles that I can.

“This little one has now idea how much his world is about to change.”

Her followers gushed over the image, as one person said: “That’s a beautiful picture to print and treasure.”

Another wrote: “Aww he will be a great big brother when his little sister arrives.”

A third commented: “The best gift is a sibling. Now try to stop feeling guilty and enjoy.”

Meanwhile, Alex announced her pregnancy with her third baby during an episode of The One Show in March.

At the time, she said: “It seems like a good time to share some news with everybody, and the crew and the studio.

Meanwhile, earlier this month, Alex Jones went on maternity from the BBC One show.

In an emotional Instagram post, Alex said: “And just like that it’s time to say goodbye to the show temporarily and get ready to welcome our little girl.

“Thanks to our viewers for helping keep me sane during this last year and a half and for the warm welcome every night.”

She added: “I’ll miss being on that sofa at 7 and of course, the brilliant team who work so hard behind the scenes.”

What do you think Alex will name her baby? Leave us a comment on our Facebook page @EntertainmentDailyFix and let us know.