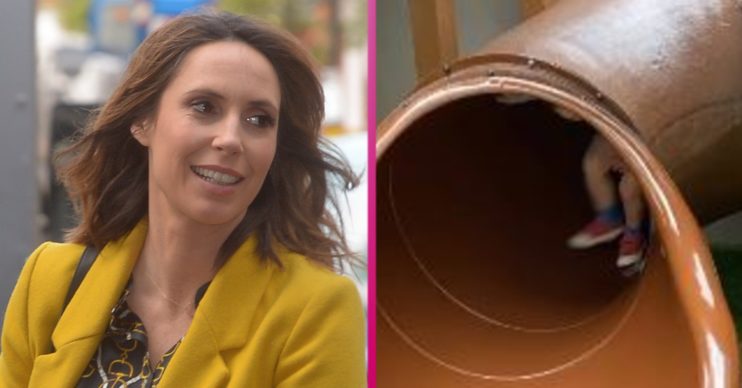 The One Show host has two sons with husband Charlie Thomson

Alex Jones had to admit she’s a ‘soft touch’ when it comes to parenting as she enjoyed a day out with son Teddy.

The host of The One Show, 43, shared a photo on Instagram of her eldest boy, Teddy, having a ball at a soft play centre.

What did Alex Jones post about her son Teddy?

In the picture, the three-year-old is just visible as he comes down a slide – and Alex hinted she was having trouble getting him off it.

The Welsh presenter joked alongside the snap: “Ok… one more go! (For the 9th time).”

She also added a sticker that read, ‘Soft touch’.

Alex shares Teddy with husband Charlie Thomson and the pair have another son, 16-month-old Kit.

The star often posts about her family life on social media, although she’s usually careful to keep her children’s faces hidden from view.

Read more: The One Show host Alex Jones fights back tears as she pays tribute to colleague after death

Last month, she posted an adorable snap of Teddy playing with his younger brother.

In the picture, also shared on her Stories, the toddler sat with Kit inside what looked like a mesh basket.

As usual, the kids’ faces were turned away from the camera in the photo, which Alex simply captioned with ‘Morning!’

The TV host recently had a break from her duties on The One Show, leaving a raft of guest presenters to hold the fort in her absence.

While off, she enjoyed a holiday with her boys, husband Charlie and her parents.

Very grateful to have had the last two weeks. Maybe the best holiday yet.

The One Show host had the ‘best holiday yet’

Alex shared a number of pictures from the trip, telling fans in the caption of one: “Very grateful to have had the best two weeks. Maybe the best holiday yet.”

Another showed baby Kit on a beach, walking hand in hand with his granddad.