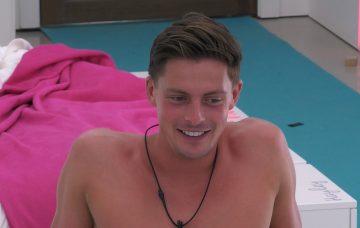 Love Island SPOILER: Alex George says his future wife could be at the villa

Dr Alex is remaining optimistic about his love prospects

Love Island’s Dr Alex George has said he’s confident his “wife” could be coming to the villa at any moment.

The medic hasn’t had the easiest start to the show after none of the girls stepped forward for him at the first coupling, and his now-partner Samira Mighty admitted she has no interest in getting to know him more.

It’s left him feeling pretty dejected about the whole experience.

But ED! can reveal Alex’s spirits are lifted on Wednesday night when the villa learns two new ladies are arriving and the boys will get to throw them a welcome drinks party!

He declares: “My wife’s coming in. Wife and mother of my children. You never know.”

Alex adds: “We’re all really excited, there’s a real buzz around the boys. For me, obviously I feel really good that this is an opportunity to meet some new girls and someone that could be my type.”

The new arrivals are certainly good news for Alex who had feared he was heading for a dumping at the first recoupling.

Samira’s made it clear she’s not that fussed about being in a pairing with him, leaving Alex fearing for his future on the show as anyone single at the recoupling will be sent home.

Before finding out about new arrivals Georgia Steel and Rosie Williams, he says: “I think if it came to recoupling, I am on borrowed time at the moment. I think my place on the island is definitely at risk. It’s frustrating because I don’t think I’ve had the chance yet.”

He adds: “I just want to show everyone inside and outside that I’ve got something to offer here.”

As well as being knocked back by Samira in their coupling, Alex was also dealt a blow when Hayley Hughes dodged his kiss during last night’s challenge.

He admits: “I was a little bit gutted I think, because I was like ‘I’ll go with whoever, just go with it in the moment’ and I just thought ‘right, I’m going to kiss Hayley.’

“Everyone’s watching as well, and it’s like another knock. I’ll pick myself up again and I’m just hoping that I’ll meet someone.

“But I do feel that I’m getting to know everyone a bit more.”

Viewers will find out tonight whether either Rosie or Georgia catch Alex’s eye, or whether the two newcomers are drawn to another one of the island’s men.