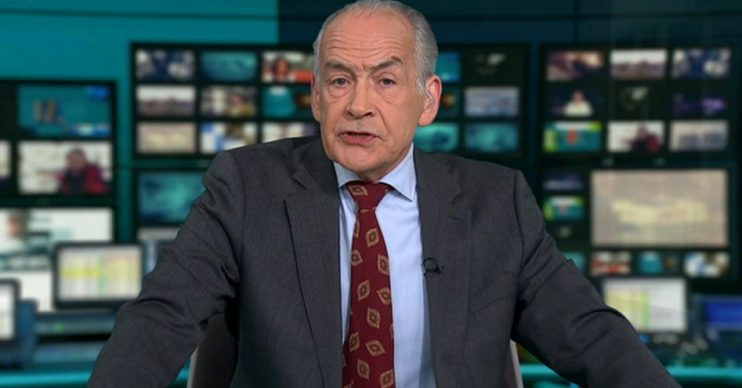 He stepped down after an 'errors of judgment' on social media

Alastair Stewart’s former colleagues are reportedly demanding to know why he was made to step down from ITN.

The ITV News presenter, 67, made the decision to step down after four decades after a comment he made to black Twitter user Martin Shapland.

During a spat with Martin, Alastair responded with a quote from Shakespeare’s Measure for Measure which contained the phrase “an angry ape”.

Many people agreed with Alastair stepping down but others believe he should be back at ITV – with one fan starting a Change.org petition titled: “Get Alastair Stewart reinstated back on ITV.”

The Telegraph claims journalists were furious over his resignation and confronted bosses in an editorial meeting earlier this week.

However, a source told Mirror Online that the ITV News meeting was “a standard, diarised, weekly editorial briefing” and it was nothing out of the ordinary.

It comes after Alastair announced in a statement: “It was a misjudgement which I regret, but it’s been a privilege to bring the news to households throughout the UK for the past 40 years.”

It’s been a privilege to bring the news to households throughout the UK for the past 40 years.

An ITN spokesperson added: “After many years working across a variety of news programmes, Alastair Stewart is stepping down from his presenting duties.

“The decision, which is supported by both ITV and ITN, follows errors of judgement in Alastair’s use of social media which breached ITN’s editorial guidelines.”

Meanwhile, more than 60,000 people have signed a petition to get Alastair back at ITV.

The petition read: “Alastair Stewart has been ridiculously forced to quit his role on ITV after 40 years due to Martin Shapland accusing him of calling him ‘an angry ape’ after quoting Shakespeare despite no direct conversation on Twitter between the two and with Martin using racism as the offense.

“The quote is reference to how a person can lose their sight with anger and refuse to listen to reason. It’s not racist either,  Martin needs to take account the evolution of apes to humans of all races.

“Martin needs to publicly apologise and Alastair needs to have his job reinstated!”