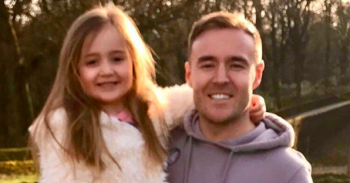 The rumour mill has been going into overdrive with regard to Corrie fave Alan Halsall’s love life of late.

Excited fans are convinced he is enjoying a romance with former co-star Tisha Merry, after the pair have appeared in several social media pictures together.

While neither of them has yet commented on what’s going on between them, Alan’s ex Lucy-Jo Hudson has confirmed that he IS loved-up.

The Hollyoaks star revealed on her Instagram page that the dad-of-one is seeing someone, and their little girl Sienna has already met her.

It’s wonderful news that Al is moving on following his divorce from Lucy-Jo, as she too has found happiness again since their split in May, 2018.

The former Wild At Heart actress shared an adorable picture of her new man, fellow actor Lewis, cuddling up to Sienna, five, on a recent dream holiday to Mexico.

She captioned the sweet snap: “I don’t know what I’d do without these 2! I love them sooooooo very much!”

As is too often the way these days, the sweet gesture was attacked by a small minority of snide trolls.

Lucy-Jo put them in their place, and let slip Alan’s happy news in so doing!

“Well there’s some cruel people in the world! Has anyone ever told you guys that if you’ve nothing nice to say then don’t say anything at all,” the 35-year-old wrote.

“Alan has moved on, Sienna’s met her, and all is good! So please stop following me if you don’t like my posts!

“Life goes on after divorce and I have done nothing wrong but find a gorgeous human being that loves me and my daughter and makes us both very happy!

Good luck to ALL of them!