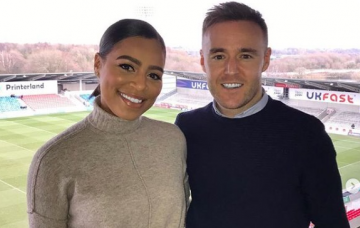 They do a lot together

Alan Halsall and his former Coronation Street co-star Tisha Merry denied romance rumours, but they now reportedly spend so much time together that Tisha is having meals delivered to Alan’s home.

In a bid to get healthy, the pair have signed up to a low-fat, meal preparation company and their deliveries have been going to the same address – Alan’s Manchester home!

Alan, 36, was pictured receiving the deliveries from the owner of the food-prep company, Joe Nolan, in his kitchen.

Next to the Corrie actor a bag could be seen with Tisha’s name on it.

Actress Tisha revealed their joint venture when she also posed in the same kitchen with Joe and wrote on Instagram: “@jcnolan11 you absolute legend. Thank you so much for my meal prep! The food is unreal.

The 25-year-old former soap star was dressed in her gym gear as she posed for the identical snap.

Ent Daily has contacted a representative for Alan and Tisha for comment.

Alan, who plays Tyrone Dobbs on the cobbles, has seemingly been spending more and more time with Tisha lately.

They first sparked romance rumours when they took a trip to the rugby in February.

They have denied they are an item but they have been working out a lot together, enjoying sessions of badminton, and they were recently spotted out to lunch this week.

They starred in Coronation Street together up until 2017, when Tisha’s character Steph Britton left the soap. She made a brief return in 2018 for the funeral of Steph’s brother, Luke.

Alan split from long-term partner Lucy-Jo Hudson last May, after nine years of marriage. They have five-year-old daughter Sienna-Rae.